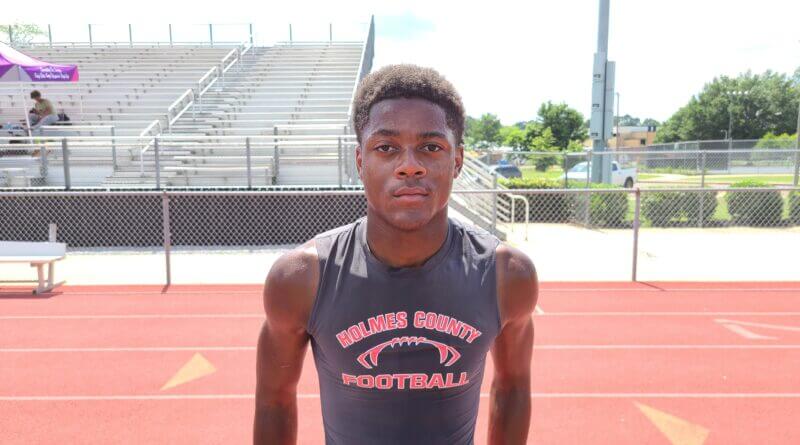 Cortez Thomas from Holmes County Central High School is a guy you’re going to want to keep up with. He is a 6’1″ 175lb 2025 defensive back.

Yesterday at the AJ Brown 7v7 camp he was very impressive. Cortez is a long guy who knows how to use his size to cover. He is very great at taking away the inside leverage from receivers. He was very impressive playing in press coverage. He has some nice strength so when he presses he can knock a receiver off his route and cause timing problems for QBs.

Cortez also is great playing off. He has nice feet and good enough hips to react. He doesn’t always have to press. He uses his instincts very well and he has the quickness to react and run with receivers on long routes. Cortez breaks does a good job breaking on the ball. He knows how to position himself to knock down passes without getting too aggressive with receivers. The refs at the 7v7 Camp yesterday weren’t afraid to call pass interference. The kids had to use skills and Thomas showed a lot of skill.

Thomas doesn’t have any film out. He will only be a sophomore next year. He caught the attention of a lot of people yesterday and needed to be mentioned. This kid will be a D1 guy when he graduates.

Cortez holds himself accountable to some of his weak points too. Yesterday you could hear his coaches telling him to forget the last play and let’s roll again. He spoke about that after the camp.

“I’m really working on completely getting bigger, stronger and faster,” said Thomas. “I have to get stronger more mentally than physically too. I am watching more films to understand a little more. Understanding my job on the field and think of ways to just be an athlete every play.”