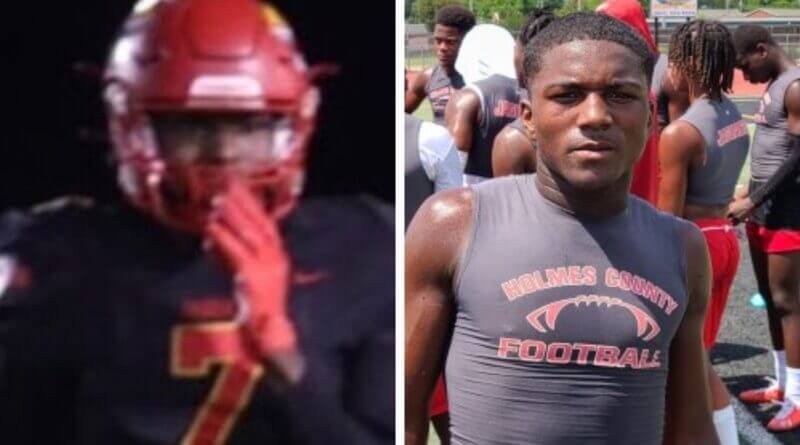 Octavious is a long guy that can play receiver or defensive back. Last year he even played QB for Holmes County Central when they needed him to. Octavious has great hands and really goes up to catch the ball with confidence. He is very great with the jump ball and does a great job of keeping defenders from knocking the ball out of his hands when he is coming down.

Octavious has a great release when he comes off the ball. He doesn’t have a slow release and he doesn’t allow corners an easy jam. If you make one mistake he is going by you. He also has a lot of bounce. He is a QB’s friend cause sometimes all you have to do is just throw it up to him. He has those basketball skills to go up and grab a football like a basketball coming off of a rim.

Octavious plays the middle of the field very well. He uses that frame to disrupt passes. He also has the speed to cover field and get after deep balls. I can definitely see him playing free safety at the next level. He has all the tools to be a D1 safety. He holds one offer from Mississippi Gulf Coast Community College.

“Octavious is physically and athletically gifted,” said coach Marcus Rogers. “I love his explosive play making ability. We can line him up at QB one play and the next play he can go outside and Win the 50/50 balls at receiver. On defense he is a big hitter and has tremendous ball skills.”

Antravion Pernell will be new to the scene next year. He is a 5’9″ 175lb RB/WR who will gain a lot of attention this season. This will be his first year starting for the Jaguars.

Antravion is another guy who was very impressive at the AJ Brown 7v7 Camp yesterday. He had corners and safeties on their heels. He was quick off the ball and his hands are like glue. He made a one handed catch with three defenders around him and that was behind a bad throw.

Antravion also ran some nice routes. He was quick from the release and didn’t get caught in bad situations a lot. He isn’t a 6’3″ guy like his brother Octavious, but he plays like he is. He has a lot of heart and you can expect to see his name ring bells a lot this year too.

“Antravion will start at slot and be the 2nd RB,” said Rogers “He can tote it too. It may be vice versa with him starting at RB. Those two kids are very talented.”