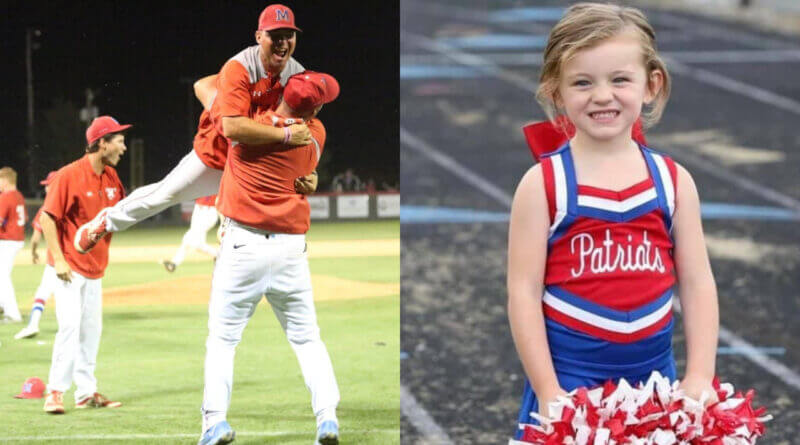 When is a game more than a game? And when does a win, even a championship clinching win, mean more than the triumph of that memory making feat?

Those are questions I asked myself and I knew that there was something in the way of an answer to those questions in the aftermath of the Marshall Academy state championship win over Wayne Academy.

I felt as though someone closer to the situation would be better suited to write about the win and what it meant to the MA community, to all of the players and fans and especially to Head Coach Bruce Branch and the Branch family.

I asked Sarah Miller Taylor to provide this article for publication and she obliged.

Below are her words about the victory and how there was some bit of healing to be had on the field in Marshall County on Saturday.

My husband Jason started his career as a baseball coach at Marshall Academy in 2012. He was a lowly assistant back then, of course. He went on to coach other places and do other things, but he came back, as MA is his first school love, and this year, he went from principal and assistant football/baseball coach to head of school. Therefore, for the first time in many, many years, he is no longer a coach, and in March, baseball season at MA started for the first time with ol’ Coach Taylor on the spectator side of the fence.

I still don’t see him. I come to every home game, like I did when he was coaching, and I sit in my rocker behind first base, and he paces like a caged animal behind the bleachers. When he said yes to this job in December, the only qualm he had was that he would no longer be coaching with head coach Bruce Branch. For three years before, they had worked like halves of the same brain, communicating with no words, effortless guiding boys around the field as they won game after game. And I knew it would be a big year to take a step back.

Four years ago, Bruce Branch came to Marshall Academy after a long gig as a coach at Heritage Academy in Columbus, Mississippi, and then at Silliman Institute in Clinton, Louisiana. He was hungry to take a Marshall Academyteam that hadn’t had a lot of wins in a lot of years to the top. The journey, as Coach Branch calls it, started there. They only won ten games that year. If you know anything about private school baseball, they play a lot more than ten games in a season. Usually, they play over thirty. But Coach Branch had a plan. My husband says he’s the most organized coach he has ever worked with. Bruce believes in practice, and lots of it, the same way every time. And he believes that a team is a family and showed the boys that in every way he knew how, especially by introducing his own wife and kids as part of the team. They bought in.

The next year, the boys were even more ready to show what they’d learned and how hard they’d worked. About a week into playing baseball, COVID took the season away. But they came back in a big way, as the next year saw them with a 31 and 5 season and 4A state runner-ups. After a heartbreaker of a loss to Riverfield Academy in Rayville, Louisiana, he had ten now-seniors ready to take what they felt like they earned for the 2021-2022 season.

This team this school year has worked so hard, like they have since their leader Coach Branch came to show them how to do it. Their eyes were on the prize from the minute the school year started. But this year was palpably, tangibly different. For the first time since her birth, head coach Bruce Branch started a baseball season without his baby girl to kiss him luck before a game.

In September, this world lost the light of Janie Branch in a tragic, senseless car accident that shook the whole community. But it shook no one harder than her momma and daddy. Every day, I have thought of her. But I have also thought about how they have had to dig to find the will to go on most days. My kids loved her like another little sister. Jason toted her around like his own child since she was a baby; I wonder how many nights she slept on his shoulder coming back from games on the team bus while her own daddy was driving. At that first game in March this year, as the field lights flashed on and the baseball boys circled the mound, she was tangibly absent. Her whole family was in attendance to support her daddy. Janie’s smile flashed from buttons on jackets, purple bracelets emblazoned with her name stuck out from coat sleeves, angel wing decals with her initials decorated every batting helmet, purple lettering along home side proclaimed us “Janie Strong.” But the girl, the enigmatic, sassy, loud little Janie Girl, was noticeably gone.

The night of the accident, most of those boys loaded up to go sit outside of Le Bonheur Children’s Hospital, waiting for any sign of hope that the unicorn-loving, purple be-ribboned, puddle-stomping little sister that they had come to love like their own would wake up. When she didn’t and she inevitably slipped away, they declared that from now on, they would live their lives “Janie Strong.” The hashtag took over, and when the season started, it was painted on the sidelines as a reminder to fight and play and love as hard as that Janie Girl did in her almost four years of life.

“Janie Strong” took hold early and motivated them to keep fighting. At every practice and every game, the boys started locking arms during prayer time, huddling close, and showing the world that no one could come between them, that there was no adversity they could not face.

This week, they played for the seventh state championship in Marshall Academy history, Coach Branch’s second. On Tuesday, Wayne Academy brought out their ace pitcher, a kid who throws like it’s breathing, like nothing I have ever witnessed on a high school baseball field. Our boys were shaken and they lost a game, in a season of 33 and 7, by two runs. During the second game at Wayne Academy, their young Nolan Ryan was unable to pitch (as he’d thrown 118 Tuesday night), but our boys were on fire, winning 6-0 in a dazzling display of defense and pitching.

Last night, Saturday, they came to us again. Their star pitcher was still unable to pitch, but they came out ready to win. In the first inning, they got 5 runs on the board before we could even get our bearings. My heart started to sink. I was worried. 5-0 is a hard thing to come back from in a baseball game, especially one of this magnitude. And then I heard one of the boys. The sound came from around the dugout, a voice that cut through in the chaos and the noise. “Do it for Janie Girl!” I know I’m fanciful by nature, and I’ll be the first to admit it. But it wasn’t long after that I heard a giggle, a familiar one, and I almost turned to see if it was a sweaty, pig-tailed little girl asking me for M&Ms, as she had a hundred times before. It sounded like Janie. And in that moment, I knew she was with us.

It was nearly at that moment that the tide just turned for the Patriots. After that, the battle was on. We pulled out nearly every pitcher we had and let them all have a turn. It was a magical thing to see. Jamie and Jackson Graves, twin seniors, got to play together one last time as pitcher and catcher. They were poetry in motion, as always. Colton Neal, the never-still third baseman, was all over that field. Colton Atherton, or as I call him “the Ghost,” was stealing bases like they were made of gold, Jordan Bonds didn’t let another pitch get past first base, and Rusty Bolden was running like the very wind. Finally, Landon Houston took the mound to pitch. The crowd was electric, chanting “Three more outs!” over and over. He struck out two batters. Up came the third. One strike, then two, then the crack of a bat and a ball sailing up and then into Landon’s glove.

The team stormed the field, spraying sparkling cider and confetti from cannons all over the place, the wind kicking up at that moment to send dirt swirling around. Every emotion you could name was playing out on that field at that moment, but the biggest was joy. A joy so big and powerful that had some measure of healing in it, too.

I was asked to write this to tell folks what this win meant to the Marshall Academy school community. I’m just the headmaster’s wife. I didn’t do a thing to get these boys here. But I can tell you that in over 50 years, the school has won their first baseball championship. That’s a big deal. The team got redemption from coming so close last year. That’s a big deal. Ten seniors ended their high school career with a championship ring. That’s a big deal.  Last night, when they were about to take the first team picture with the winner’s banner and trophy, I saw Bruce wave Jason over and tell him, “You belong in this picture!” And to me personally, that was a big deal. But these boys and these coaches have been through more than just practices and games together. Last night, I saw Janie’s momma and daddy have a moment of pure joy for the first time in a year. And that, to me, was a very big deal.

These boys wanted this win. They wanted it for themselves and for the school, yes. But they also wanted it for a little girl with pigtails and a scrunched up nose and sticky hands who called them stinky and demanded piggy-back rides to the field house. You can’t tell me she wasn’t there with us that night. In the apple cider bubbles and the confetti and the noise and the wind and the swirling dirt, she was there. They did it, and they did it Janie Strong.