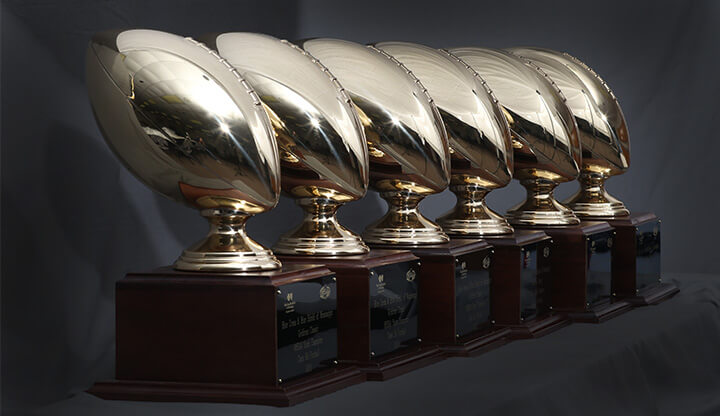 Despite the tumultuous road it took, we are finally ready to see state championship football action.

Stay tuned here for live updates on every championship matchup from 1A to 6A.

Magee taking the field. They will receive.

Magee forces a turnover on downs at the Trojan 36. Magee takes over there.

Rupert connects with Antonio Fowler on an outstanding 42-yard catch. 2pt no good.

Chandler Pittman finds Kyerston Tucker all alone on the slant for a 14-yard TD catch.

Rupert breaks a long run but loses the football. Magee takes over after the recovery on their own 11.

Magee with the ole snapped it over the punters head-wait no the upback has it-play and it’s good for 46 yards and a first down at the Noxubee County 33.

Rupert finds the big fella Demone Cunningham over the middle for a 15 yard score. Score came after an excellent kick return. PAT no good. @SocialSportsMs

Touchdown Magee. Chandler Pittman runs it in from 8 yards out.

TOUCHDOWN TROJANS Why not? Chandler Pittman with yet another TD accounted for. 3 yards out. Huge score. 2pt good. @SocialSportsMs Magee 28, Noxubee 20 44 sec. 2Q

Jared Redding and Walker Bailey discuss the first half. HALFTIME: Chandler Pittman and Chrishard Rupert putting on a show for both Magee and Noxubee. Trojans lead Noxubee 28-20 at the break.

START OF THE SECOND HALF

Magee’s offense is on the field and the second half is underway.

Magee is trying to break this game open.

FUMBLE | Magee recovers as the Tigers mishandle the option pitch and Magee falls on it. Trojan ball at the Noxubee 26 yard line. @SocialSportsMs Magee 35, Noxubee 20 6:22 3Q

This game is officially busted open.

Noxubee will not go quietly in this game and they answer with a Chrishard Rupert sneak.

End of 3 quarters of play: Magee 42, Noxubee County 26 Magee has 1st & 10 at the Noxubee 24 when play resumes. 12 minutes for the first title in twenty years for Magee.

Rupert’s pass is picked off by Caleb Bridges and Magee is back on the throttle. Ball on their own 31.
@SocialSportsMs

PREGAME: It’s David vs. Goliath here in this Class 1A State Championship game between Lumberton and Biggersville. @WalkerBailey8 and Jared Redding preview this dandy here. This preview was brought to you by Grisham Insurance and Mi Toro Mexican Restaurant.

TOUCHDOWN PANTHERS Guess who? Robert Henry takes the handoff on the opening drive and caps it off with this TD. 2pt no good. @SocialSportsMs Lumberton 6, Biggersville 0 7:32 1Q

John Eaton comes up with the strip sack and recovers the fumble for Biggersville. Big time red zone stand there for the Lions.

Trevon Jessie leaps and gets the interception for Lumberton. Panther ball at the Biggersville 25.

Lions get a big play to the 5 yard line but it is wiped out with a tripping penalty. 1st and 40 for Biggersville.

Last game of the night is Oxford and Oak Grove.

Oak Grove strikes first after an Oxford 3 and out.

FAKE PUNT FAILS. Warriors take over at the OG 44. Not a good start for Oxford. @SocialSportsMs Oak Grove 7, Oxford 0 6:59 1Q

Warriors lose the football on 3rd and short, but recover. OG punts. Charger ball at their own 11. @SocialSportsMs Oak Grove 7, Oxford 0 4:50 1Q

Second half is underway

FUMBLE | Chargers recover Barnett drops the football and Chargers fall on it. Ball at their own 41. @SocialSportsMs Oxford 14, Oak Grove 14 8:05 3Q

FUMBLE | Warriors recover Oak Grove gets it right back. Wortham loses it on a tunnel screen. Ball at their own 38. @SocialSportsMs Oxford 14, Oak Grove 14 6:47 3Q

This ends day 1 of the MHSAA championships.

We are ready to go for day 2 of the MHSAA championships:

Schedule: 4A: Poplarville vs. Louisville, 11p 2A: Taylorsville vs. Calhoun City, 3p 5A: West Jones vs. West Point, 7p

HOW TO WATCH THE 4A STATE TITLE GAME LIVE

That was a very methodical opening drive.

Louisville with their own nice drive being put together

SACKED | TURNOVER ON DOWNS Hudspeth can’t get the first down and Poplarville gets the first stop of the game. @SocialSportsMs Poplarville 14, Louisville 7 4:22 2Q

TURNOVER ON DOWNS Hornets open the second half with a red zone stop. Poplarville ball at their own 12. @SocialSportsMs Poplarville 14, Louisville 7 4:05 3Q

END 3Q Poplarville 14, Louisville 7 @SocialSportsMs The Hornets are 12 minutes from their first state title. Can they hang on?

Going for two for all of the marbles

It is good! What a gutsy play call and effort there!

FINAL; Louisville wins 15-14. Great game. Up next is the 2A title game

2A game is underway

Taylorsville foces a Calhoun City 3 and out

TOUCHDOWN TARTARS Ty Keyes scrambles and finds Tyrese Keyes all alone in the end zone from 26 yards out. We may need some mop up duty. Taylorsville 28, Calhoun City 0 4:54 2Q

SECOND HALF IS UNDERWAY

TOUCHDOWN TARTARS Ty Keyes finds Jeffery Pittman all alone in the middle of the field and goes for a 30 yard TD. The onslaught continues. @SocialSportsMs Taylorsville 35, Calhoun City 0 5:57 3Q

FINAL Taylorsville 42, Calhoun City 0 @SocialSportsMs Tartars run away with their ninth state title. Also, this was the largest margin of victory in the MHSAA State Championship era (1981) since 1998 (Smithville 56, Pelahatchie 8).

PREGAME: History will be made on one side or the other in this Class 5A State Championship. Will West Jones finally bring home a gold ball or will West Point dethrone South Panola as kings of MS high school football? @SocialSportsMs@WalkerBailey8 and I preview this game here.

Mustangs to get the ball to start

Nice opening drive for a TD:

One first down for West Point. That’s it. Green Wave punt and Mustangs fair catch it at their own 24

Alan Follis is picked of by West Point

This is SMASH MOUTH football

TOUCHDOWN MUSTANGS Kendorean Russell finds the end zone out of the cannonball. @SocialSportsMs Ladies and gentleman, is this the team? West Jones 20, West Point 7 2:35 2Q

SECOND HALF IS UNDERWAY

END 3Q West Point 27, West Jones 27 @SocialSportsMs The conclusion that we all deserved for the 2020 football season. Buckle up, folks. History will be made tonight.

TOUCHDOWN MUSTANGS Kentrel Pruitt with the hat trick. Three touchdowns on the ground, this one from 3 yards out and West Jones takes the lead. PAT no good. @SocialSportsMs West Jones 33, West Point 27 11:20 4Q

West Jones is the 5A champion