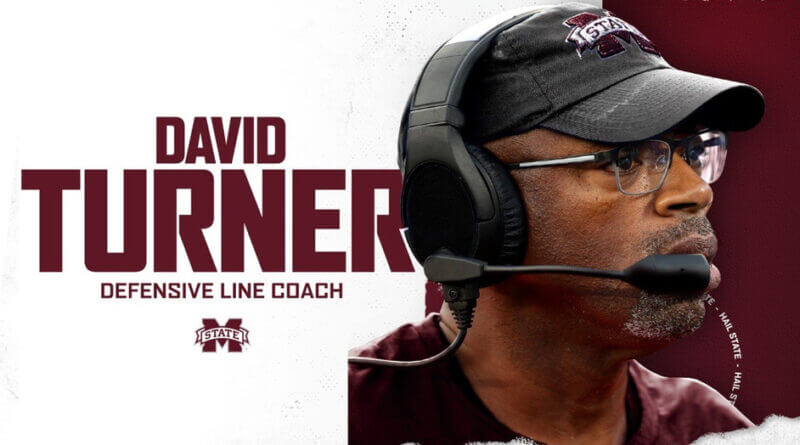 “We’re happy to welcome David Turner back to the Mississippi State Family,” Arnett said. “When you tune in to the NFL on Sundays, you will see the best defensive linemen in the league who were recruited, signed and developed by Coach Turner. Having spent two decades in the SEC, he understands what it takes to compete at the line of scrimmage in this conference. His experience, reputation and proven track record coaching some of the most dominant defensive lines in the country will make him a huge asset for our players and staff.”

Turner has coached renowned defensive fronts that earned a reputation for being consistently disruptive and pressuring the quarterback throughout the course of his career. He has coached 15 NFL Draft picks in addition to several other NFL standouts during his 37-year collegiate coaching career. He mentored Bulldog standouts Chris Jones, Fletcher Cox, Preston Smith, Pernell McPhee, Josh Boyd, Kyle Love, Gerri Green, among others during his time in Starkville. He also was responsible for signing five-star defensive tackle and future NFL first-round draft pick Jeffery Simmons. While serving as Texas A&M’s defensive run game coordinator at Texas A&M (2016-17), he tutored eventual No. 1 overall NFL draft pick Myles Garrett.

“I’m very thankful to Coach Arnett for this opportunity to be back in Starkville which we consider home and back in the great state of Mississippi to work with some of the best defensive minds in the game,” Turner said. “Mississippi State has a longstanding reputation for elite defensive line play, and there is no doubt that tradition will continue. I’m excited to hit the ground running and get to work with our team! Hail State!”

In 2020, Florida continued to show its prowess in getting to the quarterback. The Gators tied for the SEC lead and tied for seventh nationally with 35 sacks. UF also ranked second in the league with 73 tackles for loss.

In his first season with the Gators in 2019, Turner helped instill a relentless pass rush as Florida was one of the best teams in the nation, ranking fifth nationally with 49 sacks – which led the SEC by 12 sacks and was the fourth-highest season total in program history. The Gators also tied for 11th nationally with 102 tackles for loss on the season, which led the SEC by six TFLs.

In 2015, the Bulldogs set a school record with 98 tackles for loss, while the 2014 unit produced 37 sacks, which ranked No. 2 in the SEC and were the third-most in school history.

In 2014, when Turner helped the Bulldogs to its first 10-win season since 1999 and a berth in the Orange Bowl, the Bulldogs defense produced the second-most sacks (37) in the SEC and was the nation’s No. 1 red zone defense, as opponents scored on just 63.64 percent of their chances in the red zone. Under Turner’s tutelage, senior Preston Smith had a career year in 2014, racking up a team-best nine sacks and 15 tackles for loss.

In his first season back at Mississippi State in 2013, Turner helped lead one of the best defenses in the SEC, ranking among the SEC’s top five in total defense (fourth – 349.3 yards per game) and rushing defense (fourth – 144.2 yards per game). During the last three games of that season, MSU allowed just 11.3 points per game, including two contests that featured overtime stands.

At Kentucky from 2010-12, Turner helped the defense improve in tackles for loss, sacks and rushing yards allowed from the year prior to his hire. The Wildcats improved their sacks-per-game average each season under Turner’s watch, posting more than two per game in 2012.

In his first season at MSU in 2007, he helped the Bulldogs to their first postseason appearance in seven years, a championship of the AutoZone Liberty Bowl. Three of his linemen, second-team All-SEC performer Titus Brown, Jesse Bowman and Cortez McCraney, went on to sign NFL contracts.

During his lone campaign in Tuscaloosa, the Crimson TIde finished No. 23 nationally in total defense in 2006. Meanwhile, during his three seasons in Nashville, Turner served as the defensive line coach and recruiting coordinator at Vanderbilt.

One of his linemen, tackle Jovan Haye, went on to the NFL. Vanderbilt had a significant upgrade in talent level during Turner’s term as recruiting coordinator as he helped bring in the players for the Commodores’ eventual Music City Bowl championship in 2008.

A native of Goldston, N.C., Turner also has worked in the Big Ten Conference at Minnesota (2001), where he coached defensive ends, and in the Atlantic Coast Conference at Virginia (1997-2000), where he mentored defensive tackles and linebackers. He also was co-special teams coordinator in his final season. The Cavaliers played in the Peach Bowl, Micronpc.com Bowl and the Oahu Classic during his term there.

Turner began his collegiate coaching career in 1986 as an assistant at his alma mater, Davidson College. He worked with the running backs and tight ends over a two-year stretch. In 1988, he moved to North Carolina State, serving two years as a defensive graduate assistant. He worked with a Wolfpack unit that ranked first in the ACC in total defense in 1988 while playing in the Peach Bowl and Copper Bowl.

He spent one year as the defensive line coach at Indiana University of Pennsylvania, helping the team to a 12-2 overall record while reaching the Division II national championship game. He also worked two seasons at James Madison, helping the Dukes to a 9-4 record and a berth in the 1991 Division I-AA playoffs.

Turner returned to the Division I-A ranks in 1993. He spent two seasons as defensive ends coach at Kentucky, where he helped the Wildcats advance to the 1993 Peach Bowl. In 1995, he went back to NC State, coaching defensive ends and linebackers before going to Virginia in 1997.

Turner played running back at Davidson from 1981-84 and graduated with a bachelor’s degree in sociology in 1985. He and his wife, the former Yvette Modica, have two daughters: Bianca and Alexyia.