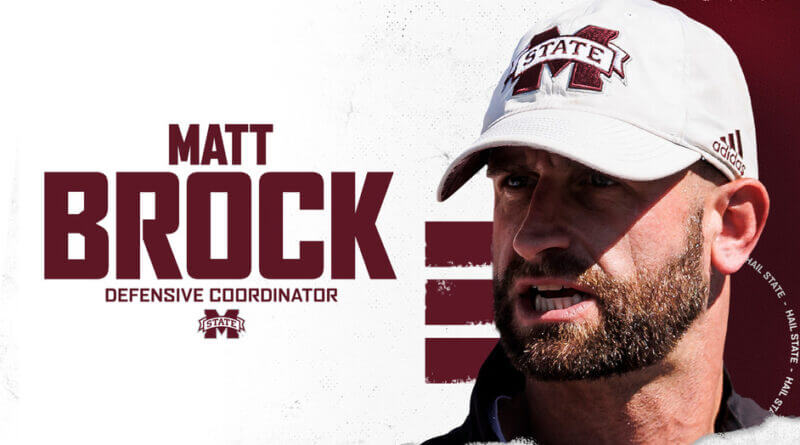 Matt Brock, a three-year member of the Mississippi State coaching staff who has played an integral role in the success of the team’s defense, has been elevated to the Bulldogs’ defensive coordinator, head football coach Zach Arnett announced on Wednesday.

Brock, who was hired in 2020 as special teams coordinator and outside linebackers coach, coached the program’s entire linebacker corps in 2022 and most recently called the defensive plays during MSU’s 19-10 ReliaQuest Bowl victory over Illinois on Jan. 2.

“Matt Brock is a rising star in the coaching profession who has made a tremendous impact on our defense the last three seasons,” Arnett said. “I’m very confident in his ability to lead the unit, and I look forward to watching it continue to progress under his direction.”

Powered by Brock’s play calling, the Bulldog defense limited a potent Illinois rushing attack to just 22 yards on the ground, the only time the Ilini have been held under 100 yards rushing all season, and totaled 10 tackles for loss and recorded a school bowl-record seven sacks, which were also a season-high.

Linebackers Jett Johnson and Nathaniel Watson, who combined for 17 tackles and two sacks in the bowl game, were critical pieces of Mississippi State’s defense throughout the 2022 campaign, becoming the only pair of Power 5 teammates to finish 1-2 in their respective conference in tackles after totaling 114 and 113 tackles, respectively. The pair will return for the 2023 season.
Under Brock’s guidance in 2022, MSU rank fifth in the SEC in total defense (344.5), fifth in rushing defense (134.2) and second in turnovers gained (23).

“I’m grateful to be in this position and appreciative to Coach Arnett for this opportunity to lead our defense,” Brock said. “I’m thankful for our players and can’t wait to get back to work with them  in this new role and build off their success the last three years.”

During the 2021 season, Tyrus Wheat led the way defensively with 7.5 sacks and 10.5 tackles-for-loss while also compiling 46 tackles. He was equally as effective under Brock in 2020, posting 30 tackles, 6.0 tackles-for-loss and 5.0 sacks.

Prior to MSU, he spent two seasons at Washington State as the special teams coordinator while also coaching the outside linebackers.

A selection to the AFCA’s prestigious 35 Under 35 Coaches Leadership Institute for 2020, Brock’s special teams unit was solid for the second straight season in 2019. Kicker Blake Mazza ranked fifth nationally and led the Pac-12 in field-goal percentage (95.2) and earned All-Pac-12 first team honors.

Mazza, a Lou Groza Award finalist and midseason All-America second team selection by The Athletic, was 20-of-21 on field-goal attempts. He made his first 18 field goals to start the season, the longest consecutive field-goal streak in WSU history. Mazza, whose longest field goal of the year was a career-high 51 yards, led the Pac-12 in scoring with 115 points.

The Cougars ranked second in the Pac-12 in punt return average (16.2) and opponent kick return average (19.5). Additionally, freshman Travion Brown was named to the All-Pac-12 second team as an all-purpose/special teams player.

In his first season with the Cougars, Brock saw a trio of players earn All-Pac-12 honorable mention honors on special teams in punter Oscar Draguicevich III, kick returner Travell Harris and Kainoa Wilson. The Cougars finished the 2018 season 11th in the country and first in the Pac-12 in net punting (40.9), fifth in the country in kick return (27.1) and second in the Pac-12 in kickoff coverage.

Brock also mentored a pair of first-year starters at RUSH linebacker who combined for 15.0 tackles for loss. That total included 8.5 sacks, helping the Cougars lead the Pac-12 in sacks and finish third in rushing defense.

Brock arrived in Pullman after two seasons (2016-17) at Bowling Green, where he served as special teams coordinator and worked with linebackers.

In 2017, he was a nominee for the Broyles Award, given to the top assistant coach in the country. His special teams units ranked among the nation’s top 20 in net punting average (4th), kickoff return defense (3rd) and punt return defense (20th).

Prior to Bowling Green, Brock spent three seasons (2013-15) at Texas Tech as a defensive quality control assistant. He also coached the defensive line in the Texas Bowl against LSU in 2015. Brock was the defensive quality control coach in his first season at Tech in 2013, before being promoted to inside linebackers coach early in the 2014 season. He served in that capacity through the remainder of that season.

In 2014, Brock spent the majority of the season as the inside linebackers coach, developing All-Big 12 linebacker Sam Eguavoen. He assisted in developing the game plan each week and was directly involved in analysis and evaluation on game day.

During Brock’s first season with the Red Raiders in 2013, he coached Will Smith who garnered All-Big 12 honors along with being named Holiday Bowl Defensive Player of the Game. Smith was drafted in the seventh round by the Dallas Cowboys.

Brock arrived in Lubbock following two seasons at his alma mater Baker University (2011-12), where he served as a graduate assistant coach, oversaw the team’s linebackers and assisted defensive coordinator Jason Thoren in the coaches’ booth on game day.

Brock was a linebacker during his collegiate playing career at Baker. He tallied 277 career tackles and seven interceptions while leading the league in total tackles and tackles per game in 2010. A 2009 and 2010 all-conference selection, Brock was a two-time Academic All-American and earned several team most valuable player awards.

Brock graduated from Baker in 2011 with a bachelor’s degree in physical education. He and his wife, Alyssa have one daughter, Emma.