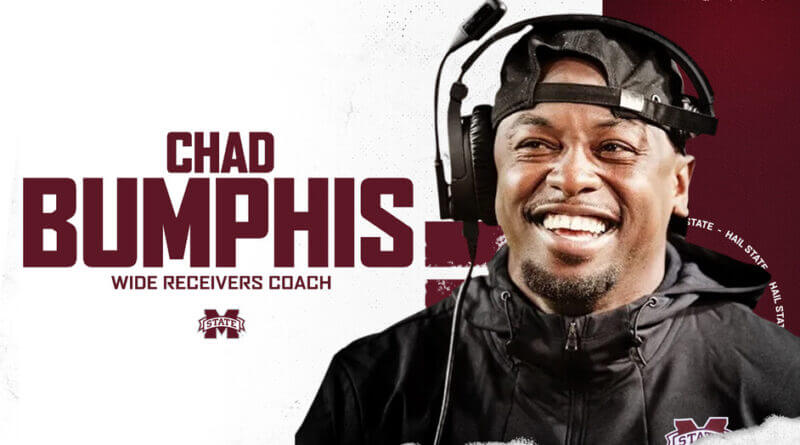 Bumphis, a Tupelo native, returns to Starkville after spending the past two seasons at Utah, where he helped the Utes to back-to-back Pac-12 championships and two Rose Bowl appearances.

“Bringing Chad Bumphis back home to Mississippi State has been a key priority for us,” Arnett said. “His reputation and relationships in this state are unparalleled. He had a legendary career here as a player and has done a terrific job at each of his coaching stops. He brings experience, knowledge, and familiarity with Mississippi State, and we are proud to welcome him back to Starkville.”

In 2022, Bumphis’ wide receivers unit helped Utah rank No. 5 in the Pac-12 in both scoring offense (38.6) and total offense (466.9). Devaughn Vele led all Utah wideouts with 55 catches for 695 yards and five touchdowns, the third most receiving scores on the team, while Jaylen Dixon added 33 catches for 344 yards and three scores. Money Parks also hauled in 26 receptions for 414 yards and two touchdowns.

Britain Covey was the top wide receiver target during Bumphis’ first season, catching 52 balls for 514 yards and three touchdowns. Vele also made an impact during the 2021 campaign, contributing 23 catches for 389 yards and a score.

“I’m fired up to be home!,” Bumphis said. “My wife Nataly, my son Ace, and I couldn’t be happier. I started coaching to specifically take this job. This is home and I’m fired up to get to work. Thank you to Coach Arnett for giving me this opportunity and bringing us home. This place is special and I’m ready to get to work.”

At Austin Peay in 2019, Bumphis was part of a coaching staff that helped the Governors to a record of 11-4 and an average of 34.5 points per game. His wide receivers played a key role in the team ranking 20th nationally in passing yards (3,208). Under Bumphis’ guidance, DeAngelo Wilson led the FCS in receiving yards (1,564) and earned Second-Team All-Ohio Valley Conference honors.

Before entering the coaching ranks, he signed as an undrafted free agent with the Miami Dolphins in 2013 and spent time with the practice squads of the Dolphins, Denver Broncos and Jacksonville Jaguars before finishing his professional career with the Canadian Football League’s Edmonton Eskimos in 2015.

Bumphis was Mississippi State’s leading receiver three of his four seasons from 2009-12 and holds the school record for receiving touchdowns (24), ranks second in career receiving yards (2,270) and second in receptions (159). Bumphis was named to the Freshman All-Southeastern Conference team by the league’s coaches in 2009 and was a second-team All-SEC receiver by the AP as a senior in 2012.

He received his bachelor’s degree in communication from MSU in 2013.

At Tupelo High School, Bumphis was a first-team All-State receiver. He racked up 2,207 yards and 23 touchdowns during his career.