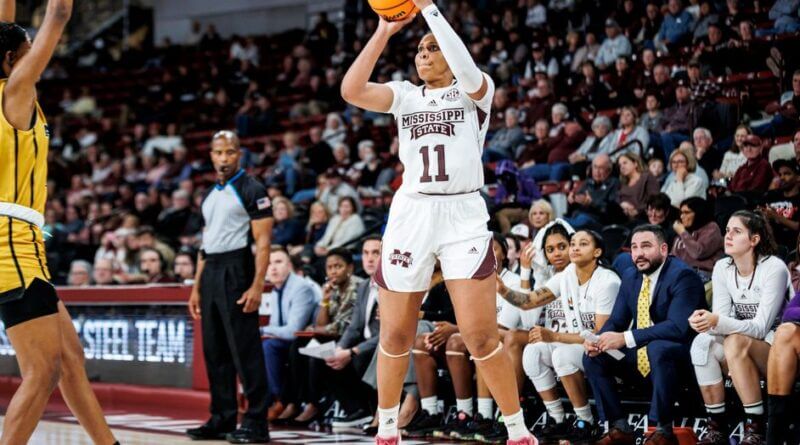 Mississippi State women’s basketball is back home inside Humphrey Coliseum on Sunday, Nov. 20, when the Bulldogs welcome Colorado State to The Hump. The contest will tip off at 3 p.m. with doors opening at 2 p.m.

Numbers To Know
10+ • Denae Carter is finding her groove once again. State’s leading rebounder last season in boards per game, Carter already has a pair of double-digit rebounding games. She set a season-high with 12 vs Alabama State while also earning her first double-double of the season (fifth of her career).
8.8 • Mississippi State is averaging 8.8 blocks per game, which ranks second nationally and second in the SEC. Leading the way has been Jessika Carter, who leads the SEC with 15 blocked shots this season. Carter already has two games with six blocked shots
20.0 • Mississippi State’s 3-point percentage defense has been excellent so far this season. Opponents are making just 20% of their attempted 3-point shots, which is the 21st-best average in the country.

Series History
• This will be the first meeting in program history.

Bulldog Takeaways
• Mississippi State is 3-1 on the year after dropping a one-point contest on the road at South Dakota State.
• MSU is averaging 81.0 points per game, the 51st-best ppg average in the country.
• State is allowing just 49 points per game, the 29th-best mark in the country.
• Vs Alabama State, Denae Carter recorded her first double-double of the season, while Jessika Carter earned her third double-double in four games.

Get-To-Know Colorado State
• Alabama State enters Sunday with a 3-0 record. Their three wins this year have come against BYU, Montana and Western Colorado.
• When CSU plays in Starkville, it will be the Ram’s first road game of the season.
• CSU is averaging 83 points per game while allowing 58.7 ppg to their opponents.
• The Rams are led by McKenna Hofschild, averaging 18.7 ppg and shooting 70% from the floor. Hofschild also leads the team in assists with 28.
• Hofschild’s 28 assists this season is tied for the seventh most in America. She leads the country in assists per game at 9.3.

Up Next
The Bulldogs will hit the road and spend the Thanksgiving holiday in Puerto Rico. Mississippi State will play two games while in Puerto Rico. State will tip things off on Friday, Nov. 25 at 10 a.m. CT against Georgetown before taking on Nebraska on Nov. 26 at 12:30 p.m. CT.