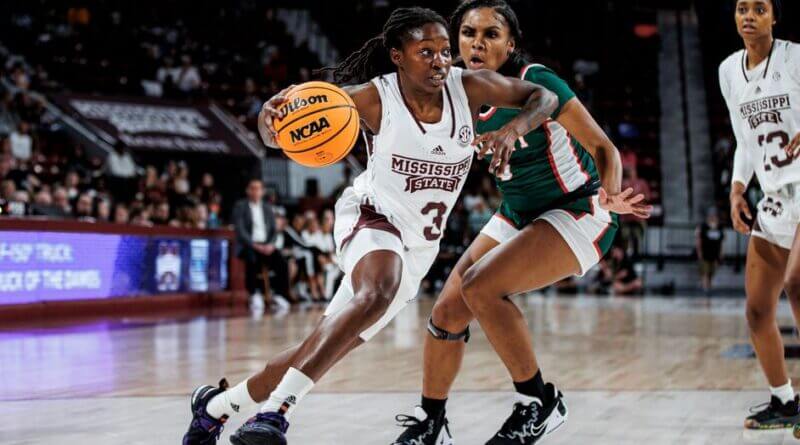 It’s a quick turnaround for the Mississippi State women’s basketball squad but also a special one. Coming off an impressive 104-47 victory in head coach Sam Purcell‘s debut, the Maroon and White will have another Bulldog to celebrate on Friday when Mississippi State welcomes home LaToya Thomas to commemorate her No. 32 jersey.

Mississippi State will hold a ceremony at halftime of Friday’s game vs North Alabama, where they will unveil the jersey for the first time.

LaToya Thomas
• Mississippi State will commemorate the No. 32 jersey of LaToya Thomas on Nov. 11. She will be the first woman at MSU to earn this honor.
• In her career, LaToya scored 2,981 points, the most by any basketball player, male or female, at MSU.
• She was a 4x Kodak All-American, one of just six players to earn that distinction at the time of her graduation.
• Thomas also earned two SEC Player of the Year awards and was the first SEC player in history to lead the League in scoring all four years of their career.
• She was drafted No. 1 overall in the 2003 WNBA Draft, becoming the first player born in Mississippi to be drafted with the top pick in a professional draft.

Get-To-Know UNA
• North Alabama is coached by Missy Tiber, who is in her 10th season with UNA. She has amassed a record of 141-114 in her 10 seasons as a Lion.
• UNA was selected sixth in the ASUN Preseason Coaches Poll.
• Skyler Gill was selected as the ASUN’s Preseason Defensive Player of the Year and earned a spot on the preseason All-ASUN team.
• The Lions defeated Christian Brothers 78-68 in their season opener on Nov. 7. Jade Moore led the way with 19-points on 7-of-16 shooting, including five triples.
• UNA completed its four years of transition from NCAA Division II to NCAA Division I at the start of the 2022-23 academic year.