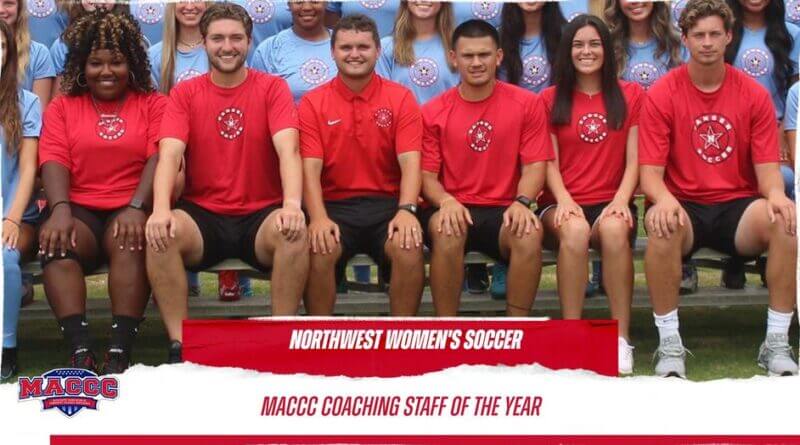 After guiding Northwest to its first-ever appearance in the NJCAA Division II Women’s Soccer Championship, coach James Beattie and his staff have been awarded as the MACCC Women’s Soccer Coaching Staff of the Year, the conference announced on Friday.

This is the first year that the conference has recognized an entire coaching staff for the award, which was previously labeled MACCC Coach of the Year up until this season. Northwest previously garnered MACJC Coach of the Year accolades under Levi Nunnally (2017) and recent Northwest Sports Hall of Fame inductee Peter Jarjoura (2006).

“I’m really honored to be chosen for this award by the coaches that we compete against,” Beattie said. “This conference has so many good coaches, so it’s certainly special to win this award. The staff and I have been working hard all year to try and give our players the best chance to perform on the field. Every member of our staff play a major role in what makes this team special and I am honored to share this with them.”

Beattie’s staff includes assistant coach Corey Irvine and a slew of volunteer assistant coaches – Matt Ross, Angel Hailey, Brandon Boren and Katie Smith. Ross is in his second season as a volunteer assistant, while Irvine joined the staff full-time over the summer. Boren, Hailey and Smith are all in their first seasons on Beattie’s Northwest staff, with Hailey still holding the Lady Rangers’ career saves record from her time as a goalkeeper (2017-18).

Northwest was a mainstay all season in the NJCAA national rankings, quickly climbing into the Top 10 early in the season. The Lady Rangers froze at No. 6 in the final polls amidst a crowded field at the top of the rankings, but captured the program’s first national tournament bid as an at-large selection and finished as the Region 23 runners-up.

Earlier in the week, the Lady Rangers saw seven players earn All-MACCC accolades, the most selections in a single season. The group was highlighted by first team honorees Raylin Dixon and Jennifer Enriquez.

Northwest will begin play in the NJCAA Division II Women’s Soccer Championship in Tucson, Ariz. as the tournament’s No. 4 overall seed. Competing in Pool D, the Lady Rangers will open competition on Monday, November 14 against Northeast (Neb.) at 6:30 P.M. Central.