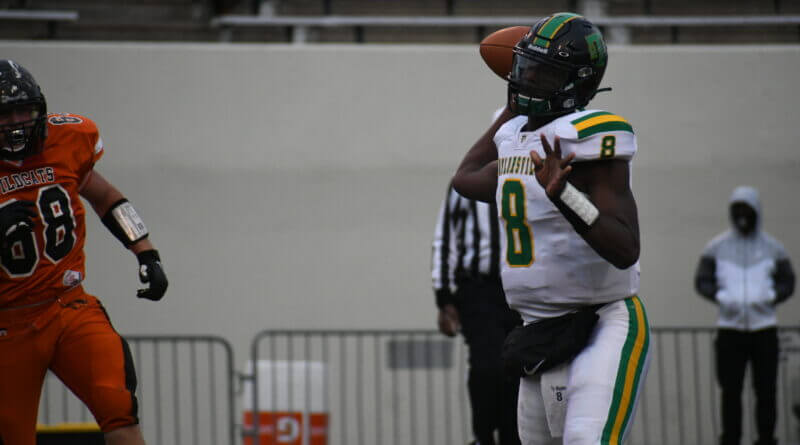 The Coronation of a King: Ty Keyes finishes his career at Taylorsville in style, defeats Calhoun
City 42-0 in 2A state title game

Ty Keyes has had a phenomenal career as the quarterback at Taylorsville, and he went
out in style Saturday at the state championship.

The Tartars defeated Calhoun City 42-0, led by Keyes who had 217 yards and
three touchdowns through the air and 20 yards rushing with a rushing touchdown.

“I’m glad that we got the W with this team,” Keyes said. “We worked hard all summer
and we set a standard here that the Tartars should come ready to win state every single year.”

Keyes was able to get his hands on the gold ball and the first reaction he had was the
celebrate with the fans in the stands. Taylorsville brought a large number of people from their
community to back the Tartars, and the moment was symbolic of Keyes’ time as the
quarterback at Taylorsville.

“Our fan base comes out and supports us every single Friday,” Keyes said. “We love our
fans and we feed off of them on the field and we get lit when they get lit.”

Keyes finished his career with 14,555 passing yards and 155 passing touchdowns. There
came a time where the things that Keyes could do on a football field were indescribable.
Taylorsville head coach Mitch Evans has cherished every Friday night that he’s been able to
watch Keyes play.

“He’s just a pillar of this community,” Evans said. “He’s never in trouble in school, he
pays attention in class, and he does the right thing all the time on and off the field. Everybody
can see what kind of a player he is but nobody knows how good of a kid he is.”

Keyes hasn’t only impressed his own coach over the last four years. Former NFL safety
and current Calhoun City head coach M.D. Jennings took notice of how special Keyes is on the
field.

“Ty Keyes is such a great football player,” Jennings said. “Obviously most people in the
country have come to know about him and he makes everyone around him better. I told my
staff I don’t think people talk about the players around him enough, but he makes those guys
better.”

Keyes was asked to try to put the last four years in perspective and was at a loss for
words. Similar to everyone who has watched him, it took him a moment to describe how
special these waning moments of his career were to him.

“First of all, all I can do is thank God,” Keyes said. “As a team we came in every day for
practice, film study, and timing. I’m thankful for my coaches they’ve consistently put us in great
positions to win.”

From the very beginning of the game, it felt like Taylorsville was in control. It was a
poetic ending for a quarterback that has accomplished so much in a Taylorsville uniform.

Keyes did a little bit of everything and reminded us all why his career was so special.

“It started this morning before we ever got on the bus,” Keyes said. “We came in here
and got rolling and took care of business today. It was a special way to go out.”