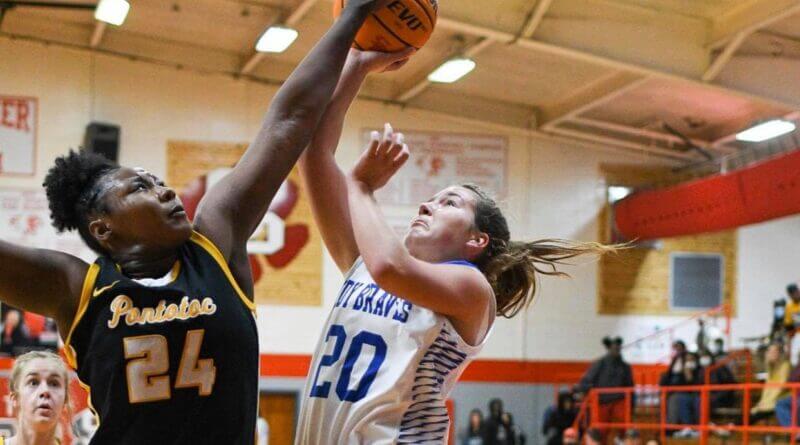 The Tishomingo County Lady Braves and Pontotoc Lady Warriors came in to their matchup on Saturday at the South Pontoto shootout ranked as 2 of the top 5 4A girls teams in the state.

The Lady Braves, despite their only loss being to top ranked 3A squad Belmont in a last second thriller, maybe hadn’t gotten the respect they have earned as a top flight team in the Magnolia state.

A big win over Pontotoc should change that.

The Lady Braves overcame a big early deficit and held the Lady Warriors to just 13 second half points to come away with a 63-44 win and move to 7-1 on the season.

Pontotoc took a 17-9 lead after the first quarter behind the hot shooting of Makayla Boyd who hit a trio of three pointers. The Lady Braves couldn’t get in a rhythm early but Jayla Brown kept Tish County in the contest with 6 points in the second quarter.

Pontotoc took a 31-25 lead into the half. From there, it was all Tishomingo County and the third quarter belonged to Maura Nunley.

Nunley poured in 15 points in the third quarter on a pair of three pointers and an onslaught of drives to the basket as the Lady Braves outscored Pontotoc 23-9 to take a nine point lead into the fourth quarter.

Pontotoc faired worse offensively in the fourth, as they only managed five points while the Lady Braves continued to play relentless defense and attack the rim, culminating in the victory in one of the premier girls matchups in the state on Saturday.

Tishomingo County was led by Nunley, who finished with 23 points and led her team on the floor. Brown ended the night with 12 while Clara Garland had 8 points and 8 rebounds.

Pontotoc fell to 7-4 on the season. They were led in scoring by Sky Vaughn with 13.

See more pictures on Instagram (sportsmississippi), Tishomingo County Sports on Facebook and on PontotocNews.com. Check out Studio107 for a complete photo album