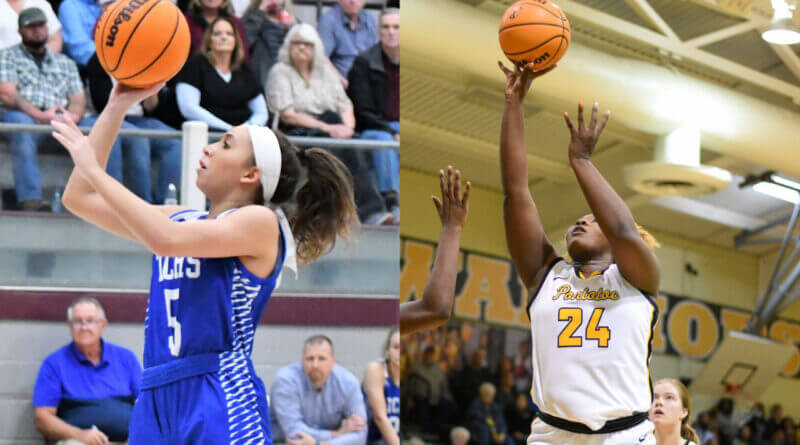 A complete preview of the Tishomingo County/Pontotoc 4A quarterfinal matchup.

Fast forward to the this season and both these teams came in with high expectations, seemingly on a playoff collision course from the start. The time has come and these proud programs will enter Friday night’s pivotal bout with an identical record of 29-3.

One team will see their season come to an end and the other will have a 30-win season and a trip to the 4A final four in Jackson.

Here is a preview of each team as they prepare for Friday night:

THE TALE OF THE TAPE

Let’s meet the competitors for this heavyweight matchup:

In the blue and white corner, hailing from Iuka and the surrounding towns, meet the contenders: the Tishomingo County Lady Braves.

The Lady Braves began the season with an impressive 25-0 record. They vaulted to the top of the 4A rankings and were receiving some well deserved statewide notariety.

They beat quality opponents during that run, including Starkville, Belmont, Columbus, Lafayette, New Site, Kossuth, Pine Grove, and others.

The big one was an exciting 77-74 win over 6A powerhouse Olive Branch on November 20.

Coach Brian Middleton’s squad continued to roll and didn’t lose a game until a January 29 rematch with Olive Branch. Even then, the Lady Braves battled from behind and fell just short, 65-64. They dropped their next two games to Belmont (2A top contender) and Biggersville (a top 1A contender). All three of their losses were to very good teams.

The Lady Braves got up off the mat and won the division 1-4A tournament. Since then, they have hosted two playoff games, pulling away from New Albany in the fourth quarter for a 68-58 win and then dismantling Gentry by the score of 72-51.

Coach Middleton’s team depends on a very solid inside/outside connection. Clara Garland is the big presence in the middle. The Tennessee Martin Signee can be very effective getting easy buckets in the paint, but is also a major factor in rebounding and shot blocking. They will need her to play well against Pontotoc.

On the outside, guard Madison Bennett, a Northeast Mississippi Community College commit, is a tough competitor and a dangerous shooter who can get hot from deep. Sophomore Reese Moore can hit from the three point line and also score creatively on drives. She is a very good player and underrated in Northeast Mississippi.

I asked Coach Middleton his thoughts about this week’s game:

THE TALE OF THE TAPE

And in the black and gold corner, from the “Land of Hanging Grapes,” it’s time to meet the reigning champions: the Pontotoc Lady Warriors.

The Lady Warriors have probably played as tough a schedule as anyone in the state. They have impressive wins over programs like Germantown, Olive Branch, Briarcrest, Collierville, and others. Their losses were to Neshoba Central (the overwhelming favorite to win 5A), Jackson Prep (the MAIS 6A Champion), and Tupelo (still in the 6A playoffs). After falling to Tupelo on December 3, Pontotoc has won 24 games in a row. They sailed through their division tournament and the first two rounds of the playoffs. They have won those last four games by a 35-point average margin of victory.

Coach Kyle Heard’s team can win in a variety of ways. They can play up and down in transition or slow the game and run offense. It helps having two inside players with versatility. Samya Brooks, a Dandy Dozen player and Alabama State signee, is always the strongest player on the floor. Jamyia Bowen, who had an incredible 23 blocks in their round two win, is a 6’2” athlete who can affect the game in multiple ways. Allie Beckley, is a small floor general who usually comes up big in important games.

When asked about the game this week, Coach Heard replied,

“We are excited about the opportunity to play for a state tournament berth. This will be a hard fought game against one of the best teams in the state.”

WHAT TO WATCH FOR?

There are at least six starters in this game who should play college basketball, including two Division 1 signees. All of these ladies have contributed greatly.

4 KEYS TO THE GAME

If Tishomingo County wants the opportunity to be the champion, they must first knock out the champion on their home floor.

If Pontotoc wants to defend their title in Jackson, they must overcome the top contender in the North.

Friday night should be an entertaining slugfest.
Get there early for a courtside seat.