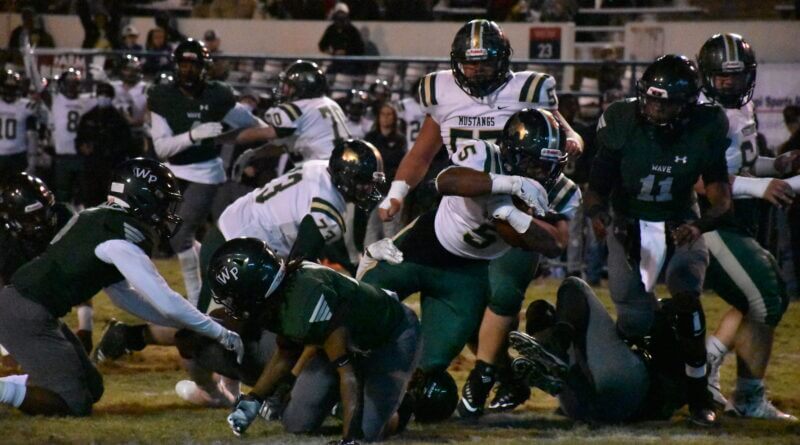 JACKSON — So close, so many times. It took 54 years to finally break through.

“Talk about getting the monkey off our back. These kids and this community. We’ve wanted this for so long,” West Jones head coach Scott Pierson said.

Follis completed 14-18 passes for 215 yards, but his poise and drive willed the Mustangs to victory down the stretch.

“When Alan plays well, we play well,” Pierson said. “Early on, (West Point) put a lot of people in the box, so we spread it out on the perimeter. When they got out of there, we got him going in the run game. What a winner.”

The Mustang defense put together a valiant effort to stop West Point’s rushing attack throughout the night, particularly in the first half. They held West Point to only one offensive touchdown in the first two quarters, on a drive where an Alan Follis interception was taken advantage of on a short, 30-yard drive.

“I was worried about our defense all week, but they answered the bell,” Pierson said. “Really proud of the way they played.”

West Jones achieved a balanced offensive attack and took advantage of the middle of the field early on. Kentrel Pruitt’s first two scores and a Kendorean Russel touchdown run gave the Mustangs a 20-7 lead 2:35 left in the first half. They would look to bust the game open following a three-and-out, but a fumble at the line of scrimmage was taken 39 yards the other way for a score. The Green Wave trailed 20-14 going into the locker room.

On the opening second half kickoff, Shavontre Ryland returned the ball all the way to the Mustang one-yard line allow West Point to tie the game. Cameron Young immediately found the end zone to make it a 20-20 ball game. West Jones answered. Follis was then used early and often in the ground game and it was only fitting that he found the end zone from five yards out. The Mustangs led 27-20 with 9:20 left in the third quarter.

West Point punched back. Young’s 10-yard score on the ground tied the game at 27 just six minutes later. Early in the fourth quarter, Pruitt got the hat-trick, his third rushing TD of the night. Yet another missed PAT made the score 33-27 in the Mustangs’ favor.

A fourth consecutive touchdown bid was later denied by West Jones’ Deonte Crosby by picking off West Point in his own territory. The Mustangs then drove all the way to West Point’s three-yard line. Three shaky plays forced West Jones to kick field goal, but was pulled wide right, giving West Point just 3:51 left in the game to tie. After converting a few third downs, their prayers were not answered with under a minute left. A turnover-on-downs allowed the Mustangs to run out the rest of the clock.

“What a game of momentum switches,” Pierson said. “What’s so resilient about this team is that all year, we’ve had breaks go against us…I just like if our kids just had to respond. They responded all night. I have some great players. When you have great players, it’s easy to coach.”