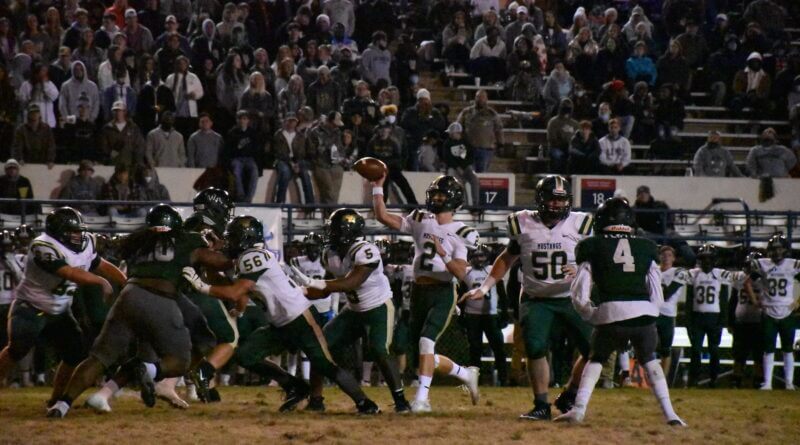 West Jones made history on Saturday when they defeated West Point 33-27 in the 5A state
championship game. It was the first state championship in the Mustangs’ history.

Head coach Steve Pierson also became the winningest head coach in West Jones history with his 175th career victory in his 19th season, but the biggest story of the night was quarterback Alan Follis.

Follis had been here before. He started against West Point in 2018, a game that the Mustangs
lost in heartbreaking fashion in front of a home crowd in Hattiesburg, but tonight was a
different story. Follis delivered on the biggest stage in the biggest way. He was precise, on time, and on target. He made good decisions, and when the clock hit zeroes, he was a state
champion.

“I have no words to describe this moment,” Follis said. “This team, this school, and this
community has been waiting for this for so long, and we’ve been so close so many different
times. For us to finally break through and do it is so awesome.”

For Follis, this was a story that he had already been a part of when these two teams met
in 2018. The Mustangs controlled the game but West Point’s ability to capitalize on mistakes
kept the game close. The Green Wave have become known for finding ways to win and West
Jones has let moments like the one they had tonight pass them by in the past, but Follis knew
that he was the guy, and this was the team to rewrite the history books.

“We finally took care of the ball,” Follis said. “We met adversity again and we overcame
it. We knew we were so close to the ultimate goal, and there was no way that this team wasn’t
going to finish the job tonight.”

Follis didn’t post gaudy numbers tonight. He threw for 215 yards and rushed for 65
yards and a touchdown. What Follis did was command the offense and was the calming
influence in the huddle late in the game as the Mustangs went blow for blow with the Green
Wave. He audibled multiple times to get his offense in the best position to succeed. West Jones
head coach Scott Pierson had complete faith in Follis to deliver and continue putting points on
the scoreboard.

“I mean if you watched him tonight and you watched the kid in 2018, they’re not even
the same player,” Pierson said. “In 2018 he was scared to death; he didn’t even have hair on his
face. Now, he had complete command of the game and was getting us into all of our plays. He
decided when we were running the ball or throwing it onto the perimeter. He’s the type of guy
that makes a guy like me look really good. When you have a triggerman you always have a
chance, and we have a good one.”

In 2018, Follis was a sophomore and came into that season as the third string
quarterback. He was thrown into action because he suddenly became the best option that
coach Pierson had. West Jones was a better football team when he was in the game, and the
continued patience paid off in a big way tonight.

“He never should’ve played as a sophomore,” Pierson said. “He was the best option we
had. He was number three on the depth chart when the season started but we just kept saying, we’re a better football team when this kid is in the game. You just hate to see him graduate.”

Follis can see the same growth in himself that his coaches have been able to see over
the last three seasons. He’s continued to work hard and continued to grow as a quarterback,
and all of the hard work that went into those three seasons was to get to this game. To be in
this moment, to bring West Jones their first state championship, and win MVP in that same
state championship. Tonight, was everything that Follis dreamed of and worked for.

“I’ve grown so much since the last time I was on this stage,” Follis said. “I’m just glad
that I was able to be a part of bringing a state championship and a gold ball back to Soso, MS.”

As much as coach Pierson believed in Follis, that belief was a two-way street. Follis
never doubted the plan that coach Pierson had put in place when he took the starting
quarterback job two years ago. To see him finally win the big game, meant the world to him.