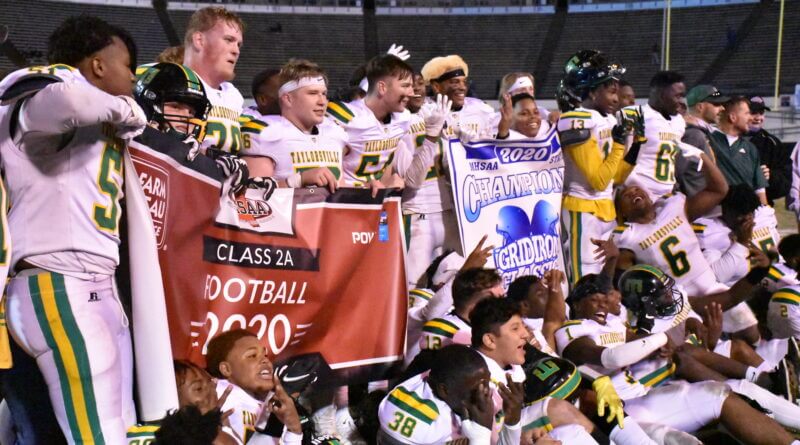 JACKSON — The dynasty is complete. One of the state’s most prolific quarterbacks in recent memory goes out on top. The tradition continues.

The Taylorsville Tartars dominated from the opening kickoff and never let up en route to a 42-0 win in the MHSAA Class 2A State Championship game at Mississippi Veterans Memorial Stadium Saturday. At the end of the night, the game was the tied for the largest point margin in the MHSAA Football State Championship era since 1998, when Smithville defeated Pelahatchie 56-8.

“It feel great right now, but our fans will be asking what’s next tomorrow. We have to move on to the next one,” Taylorsville head coach Mitch Evans said.

Ty Keyes capped off a stellar four year career completing 13 of 20 passes for 217 yards and accounting for four scores.

“That’s a one-in-a-lifetime type player,” Evans said. “If we don’t have covid, there is no doubt that he breaks every record in the state. And we don’t even ask him to throw a bunch. That’s the great thing about him. He would just rather win than anything. So he doesn’t care if he hand it off every play or throw it every play. He’s a winner.”

Game MVP went to Jeffery Pittman, who finished the night carrying the football 12 times for 167 yards and a touchdown. He also added four tackles, two of which for loss.

“For those who are overlooking (Pittman), they better check themselves,” Evans said.

He, his 15 other seniors, and the rest of his teammates took care of the rest, in emphatic fashion.

“It’s not about me, it’s about this team. That group of seniors willed us to victory week in and week out for four years. That’s a special group. I can’t say enough about them. Look at the plays that were made tonight. The majority of them were made by seniors. I’m going to miss all of them. Great players and great kids.”

The Tarters scored on every single offensive possession until midway through the third quarter, when the game was all but over. Calhoun City’s Jackson Lee was intercepted on the game’s opening possession by Dereco Crosby. Taylorsville immediately capitalized three plays later with Ty Keyes hitting Tyrese Crosby from 11 yards out. Ty Keyes found the end zone with his legs, leaping over a pile of bodies for a second score following his team’s three-and-out defensively.

Calhoun City was finally able to move the ball downfield with Jackson Lee on the ground on the ensuing possession. However a near 10 minute drive went up in smoke as the Tartar defense stuffed the Wildcats on four straight goal line plays. On the next play, Jeffery Pittman found a hole and raced 97 yards to the house. Taylorsville had a 21-0 lead with 7:24 left in the first half. Ty Keyes added two more touchdown passes by midway third quarter. Travis Keyes added a score on the ground early in the fourth quarter, all but wrapping up the game.