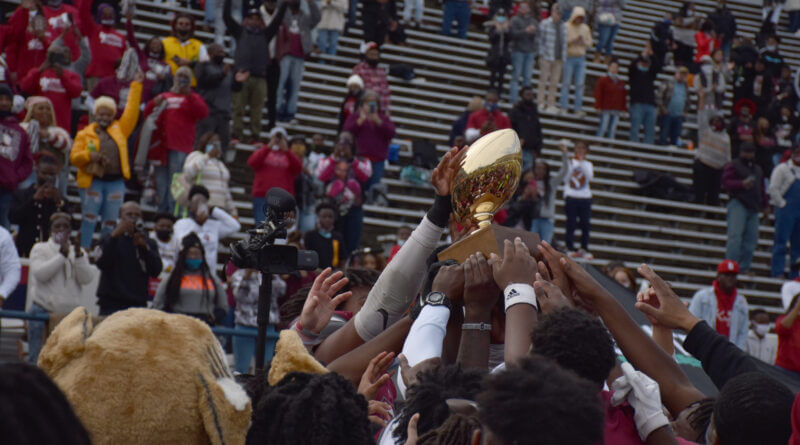 JACKSON — No matter who’s playing, no matter how hard they play, the Louisville Wildcats simply refuse to lose on the big stage.

The Wildcats shut out the Poplarville in the second half defensively and used a miraculous game winning drive to win their 10 state championship in school history, winning the 4A crown 15-14 at Mississippi Veterans Memorial Stadium on Saturday.

“Feels good to being number 10 here,” Louisville head coach Tyrone Shorter said. “We’ve been here 10 times, and we’re 10-0. For me to be a part of this program, to follow behind all the legendary coaches that played here, to put my stamp on it, it’s unbelievable.”

Quarterback Jade Hudspeth came through in the clutch when it mattered most, capping off an outstanding performance by completing 24 of 40 passes for 273 yards and the game winning touchdown pass. He was also awarded game MVP.

“He stayed in there and became a better quarterback,” Shorter said. “We put it on his shoulders. We let him pass the football. He made some hell of a throws tonight.”

For Poplarville, it was either nothing or chunk plays throughout the first half offensively.

Both teams made up three scores on each of the first three possessions of the game. The Hornets used almost eight minutes on the game’s opening drive. On 4th-and-goal, Avon Jarvis found the end zone on the ground. Louisville would punch back. Jace Hudspeth led the Wildcats on the door of the goal line and used a QB sneak to tie the game at seven to begin the second quarter.

Greg Swann proceeded to find a wide open hole in between the guard and tackle to race 63 yards to the end zone with 10:35 in the second quarter. After exchanging stops, The Wildcats faced a 2:00 drive to conclude the first half. Louisville reached the end zone, but all to no avail with a red zone stop for Poplarville. The Hornets opened the second half with another red zone stand and a turnover-on-downs.

With under five minutes left, Hudspeth and the Wildcats had another chance. The Wildcats converted three times on 4th down and Hudspeth found the look he wanted. Inside the 25 yard line, Hudspeth found Jarvis Rush in one-on-one coverage and Rush high-pointed the football for a touchdown catch. In a familiar turn of events, Tyrone Shorter was inspired.

“I just felt it,” Shorter said. “Watching that 6A game last night gave me confidence. Someone texted me this morning and asked me what I would do in that situation. I said punt. Today, I just felt it.”

Jaden Triplett took a handoff behind his tackle and broke a Hornet tackle before diving into the end zone. Louisville had their first lead of the game, 15-14 with under 30 seconds left to play. In desperation, Poplarville’s deep ball was intercepted by Joshua Nunn, sealing Louisville’s 10 state championship.