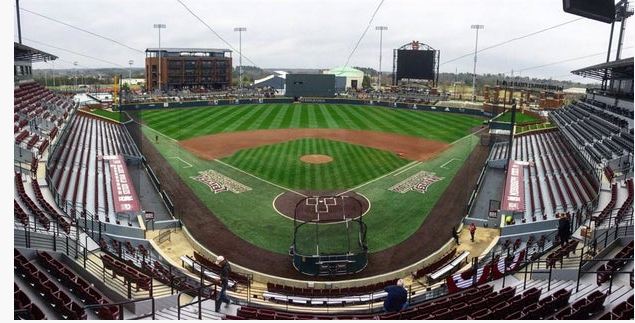 UCLA, the No. 1 national seed, has a chance to become the first school in NCAA history to sweep the College World Series and the Women’s Softball World Series. The UCLA softball team defeated Oklahoma in the first two games of the Women’s College World Series just last week. In their way stands Michigan, who is playing in their first Super Regional since 2007. The two teams have played once already, a game at Dodger Stadium on March 8, where the Wolverines won 7-5. But the Bruins have yet to lose a series all season. Michigan managed to get through the Corvallis Regional, as a 3 seed, without ever having to play No 1 seed Oregon State. There is no way to avoid UCLA this weekend, where Michigan will be outclassed on the mound. UCLA boasts the top ERA in the country at 2.59. The No. 1 national seed has made it to the College World Series in seven of the past nine years, make 8 of the past 10. UCLA wins the series in two games.

The Big 12 regular season champions (Texas Tech) versus Big 12 Tournament champions (Oklahoma State) in Lubbock. This may be the hardest series for me to predict so I will side with home field advantage, plus this time of the year Lubbock can be a hot and miserable place to play baseball. You will hear all about No. 8 overall pick Josh Jung (Texas Rangers) but keep your eyes out for 6’3”, 230-pound senior first baseman Cameron Warren, who homered in every game in their regional last weekend. And it wasn’t too many weeks ago that these two teams met for a series in Lubbock. Texas Tech would sweep the series 12-4; 10-2; 5-2. That’s too hard for me to overlook. Oklahoma State finds a way to get a win this weekend but 1 is all they get, Texas Tech wins the series in 3 games.

If I take out all bias, there may not be another series I look forward to more than this clash between two SEC West foes. These two teams are very familiar with one another having played each 11 times in this past three years, this weekend will be games 12 & 13 (and probably 14). But Ole Miss has found the recipe to success against Arkansas, not somethings many teams can say. In that span of three years Arkansas has only lost three series at home, two of those came at the hands of Ole Miss. Last year Arkansas was the CWS runner-up after losing the series to Oregon State. That loss came in heart-breaking fashion. After winning game one Arkansas led 3-2 in the ninth inning, even had Oregon State down to their final strike. Oregon State popped up into foul territory behind first base, three Arkansas players converged towards the ball, it looked as if Arkansas was seconds away from celebrating a CWS championship… except neither Razorback made the routine out. It was one of those moments that you knew, when the ball hit the ground, Oregon State would win the game and the series. Which is what ultimately happened. Arkansas looks to get back to Omaha and redeem themselves but there may not be a team in the country hotter than what Ole Miss is right now. Last week, in the Oxford regional, Ole Miss batted for a tournament best .404 and outscored their opponents 41-7. Neither team was ever really tested in their respected regionals but that shouldn’t be the case this weekend, expect plenty of fireworks. I have Ole Miss winning the series in 3 games and advancing to Omaha.

LSU started the season off ranked number 1 in the country but experienced ups and downs throughout the season including a four game losing skid in the middle of the season (two to Georgia, one to McNeese State and one to Mississippi State). But you can’t expect LSU to stay down, not at this time of year. There is something about LSU baseball that always seems different to me. They almost always look like a team that could be mistaken for single-A minor league team. It feels they’re always a little bigger and a little faster than other teams. And they also seem to play a little harder this time of year than anyone else. Which may be the reason they’ve been to 18 CWS since 1986. But there is another team that has gotten red hot of late, Florida State, and they travel to Baton Rouge this weekend in the marquee event of Super Regional weekend. Florida State’s head coach, Mike Martin, has announced that he will retire at the end of the season. Martin is the winningest coach in NCAA Division I history with 2.026 wins. The one thing that always evaded Martin? He’s never won a CWS. He will need wins 2,027 and 2,028 in Baton Rouge to keep that dream alive. Well, college baseball, and especially the CWS, always has a feel good story, this year’s feel good story will belong to Florida State. At least for a little while. Florida State win the series in 3 games.

Duke played well and was able to come out of West Virginia’s region last weekend but their prize is a trip to Nashville for a baseball series against Vanderbilt. That’s not a great draw for any team, much less one hoping to reach their first CWS since 1961. Vanderbilt has won 30 home games this season, they’ll need two more to advance to Omaha. They’ll get it. Vanderbilt wins the series in two games.

East Carolina is another team that is hot. They lost their regional opener to 4 seed Quinnipiac but won their next four by a combined score of 44-11 to advance to the Super Regionals. It helped that ECU’s four best hitters are all on a tear. Spencer Brickhouse, Alec Burleson, Bryant Packard and Jake Washer accounted for 25 RBIs in five regional games. On the other side, you may have seen the video of Louisville’s closer Michael McAvene getting ejected with two outs and 3-2 count in the ninth inning of an elimination game for showing frustration over a ball-strike call. He was suspended by the NCAA and will not be available to pitch in the first two games of this series. That might be the break ECU needed. ECU has been in the NCAA baseball tournament 16 times since 1999 but have never made it to the CWS. I’m picking them to get there this year by sweeping Louisville.

Stanford will be in for a little culture shock this weekend in Starkville. No, not because the vast difference between the West Coast and central Mississippi. But because the environment in Dudy Noble will be like nothing Stanford is use to. Just last week Stanford had only 2,406 fans watching them win their regional. You can expect that plus about 9,000 more in Starkville. Stanford hasn’t played in front of a crowd bigger than 3,470 all season according to USA Today. Stanford likes the long ball, they seem to swing for the fences with every at-bat. They are fourth in the country with 87 bombs hit this season. They also have 40 sacrifice flies this season which is good for number 3 in the country. But they are matching strength with strength. Mississippi State has only allowed 34 home runs this season, that’s second best in the SEC behind Missouri. Mississippi State’s first round pitcher, Ethan Small, didn’t seem to worry too much about those numbers, telling the Clarion Ledger “If they can bang, let them come on and try to do it I guess”. Ethan Small is 9-2 on the season and post a 1.88 ERA, along with SEC hits-leader Jake Mangum, Mississippi State has the foundation to make another run in Omaha this year. This is a team that was only one win away from advancing to the CWS title game last year so this team has tons of postseason experience. I think game one on Saturday will be a close, low scoring game that Mississippi State pulls out of victorious. Stanford will push a game three but Mississippi State’s lineup will prove to be too much and they’ll take the series on Monday.

Auburn enters the Super Regional with some of the hottest bats in the tournament. And while you would have a hard time finding a better combo at the top of the lineup than North Carolina’s Michael Busch, Aaron Sabato and Danny Serretti I think Auburn has the bats to keep up. Auburn didn’t do much during the regular season that impressed me but last weekend changed that. Auburn swept the Georgia Tech regional beating GT twice, 6-5 (in walk-off fashion) and 4-1. They seem to be playing their best ball as of late. I do think this series goes 3 games, and I won’t be surprised to see either team advance to Omaha. But for the sake of this article, I’m siding with the Tigers in 3. *For those taking notes, four-of-the-eight teams that make it to Omaha come out from the SEC

Bailey Johnson writes about all things sports, focused heavily on national news and the SEC with emphasis on the Mississippi State Bulldogs. Follow him on Twitter @hailstate4life