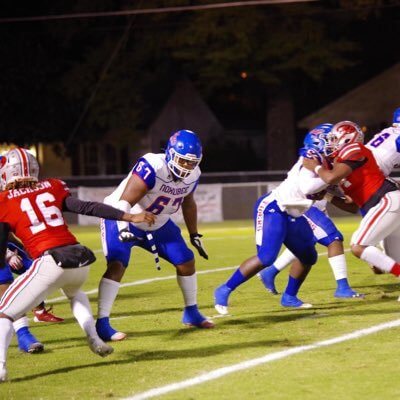 Pancakes anyone? Cause BK has them on deck. Bryson Kelly holds his own very well. He is a mean guy on the offensive line. The 6’3″ 2023 Noxubee County Tiger absolutely pounces on defenders.

When I watched his film the first thing I noticed was how he was able to move at his size. He gets down the line very well on run plays. He isn’t playing lazy taking plays off when the play is going away from him. This guy gives it his all every time he hits the field.

He also does well in the passing game. I like how he gets a good jump off the line and doesn’t spread his legs too wide allowing defenders to run right through him. He also shuffles very well and makes sure he protects his QB. He’s definitely a guy you wanna have securing your QBs blindside.

I can see him playing guard at the next level. He has a lot of strength and you can use him to help RBs pick up those thousand yard seasons. He is a mean guy that get down and dirty with those nasty defensive tackles.

He hasn’t picked up many offers yet, but this kid can definitely play D1 ball. All you got to do is watch his film and see him in person. He is truly a next level offensive lineman.

Bryson will be attending the Beasts of the Southeast Showcase, Hawaii Tiki Bowl and the All American National Championship Showcase in the near future.

“I have been working hard on getting faster and stronger this off-season,” said Bryson Kelly. “I don’t have a favorite position. I just love playing the game.”