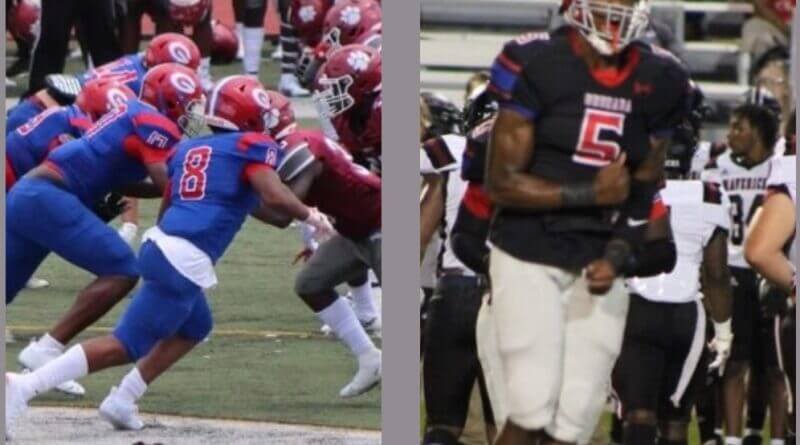 Jalon is a guy that plays OLB and safety. He can drop down and play the nickel position or he can play over the top. I can definitely see him as a rover safety guy at the next level. He is a guy that can get down in the box and be a dog, pun intended. He makes very solid tackles. He gets low and hits with form the way you teach kids to. He also is great at making open field stops. This kid has a very high motor as well. He is always active on defense and stays around the ball. He also can cover the big tight ends that most safeties have the aggression to cover, but not the hip flexibility.

“This off-season I have been working on being more explosive, but at the same time patient,” said Jalon. “I like playing nickel safety a lot. I can get more active in the passing game while being able to still play in the box.” When I told Jalon I really liked that position he was able to flex his muscle a little bit. “Yea, I gots to show em if you throw it my way IT’S A PICK!” I like these kids gritty style. You can tell Jalon likes to play in the box.

Tre Parker is more of an interior LB guy. At 6’1″ 225 LBs it is easy to see he is more demanding and gets gritty with the lineman. He can take the bumps and shoves from the guards and tackles, yet still make plays on the RB. Parker packs a lot of punches with his blows as well. He is not a guy a RB wants to see go untouched through the A or B gap on a Mike blitz. You may get your face mask rearranged. Parker is also good at making open field tackles. On his film there is a play on kickoff where he comes down the field and makes a beautiful shoe string tackle and never broke stride.

“It feels great to have my first D1 offer,” said Tre. “This off-season I’m working on being more explosive and getting faster.”

Tre and Jalon will be seniors next season and they are both prepared to be leaders for the Grenada Chargers football team. These are both definitely D1 guys. They have the size, speed, but most importantly the grades to play on that level. They are both good kids that excel on and off the field. I think they are the kind of guys you can build a defense around and win some games. They have great chemistry with each other.

“We been rocking since the 7th grade,” said Tre. “It feels good to be playing beside, Jalon.”

“It feels good to play with, Tre. We been playing with each other since the 7th grade,” said Jalon. They both let me know they have been playing with each other for the last four years. I love to see guys have a bond like that on a team. Those kind of bonds can lead to deep playoff runs and memorable seasons. Hopefully the Chargers get to the playoffs and make a run in 6A North.

“If we want to make a run in the playoffs we got to work really hard. Especially in the weightroom,” said Tre Parker.