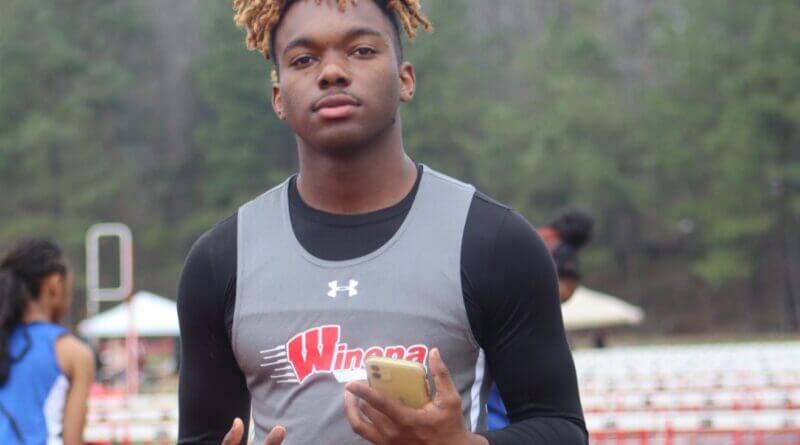 Javien Jackson from Winona will be a force to be reckoned with over the next two years. This guy really lays the wood.

Javien is a 6’2″ 210lb defensive lineman in the 2024 class. He is an amazing athlete. He runs a 4.65 in the 40. This is a kid who is country strong. He is just one of those solid athletic guys that come naturally strong. When he tackles he brings one of those angry punches. This is a guy I want on my defense. Oh yea, he also excels in track & field.

I was tagged on Twitter when I first noticed him. It was from a spring practice Oklahoma drill. A drill that separates the real from the fake and has produced some of the best basketball players in the state. He made a very very solid tackle and I was intrigued.

When I watched his film I noticed that he was very quick off the line. Almost too quick to be on the line. He gets through the gaps so fast he’s in the backfield before a RB can even brush his teeth that morning. He is a great pass rusher as well and he does it with control. He doesn’t get faked out by moves and he keeps a nice base when making open field tackles. This kid is a great athlete. He even runs down on the kickoff teams and makes tackles.

“Thanks for reaching out. I appreciate the tweet about me. I’m grateful for that,” said Javien Jackson. He was referring to a post I made on Twitter giving a few details about his film. “The off season has been great. We have a lot of things we are working on to get better.”

Javien has a long time to grow. The sky is the limit for him with his size and ability. With him being so fast I can see him being a future Defensive End or OLB. He can easily get that 4.65 down to a 4.59 which would be very scary for offenses. Jackson is very long and can have the wing span for the outside containment, covering the flats and manning up with a tight end.

“I have been working on my footwork , speed, eye coordination and being a big leader as a D-Line,” said Jackson. “I’ll be a senior next year so it’s our time to step up.”