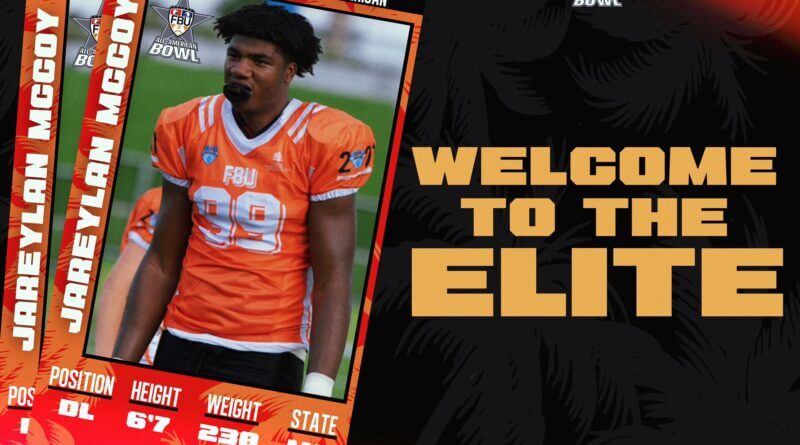 JaReylan McCoy has picked up two SEC offers as just an 8th grader. Ole Miss and South Carolina have both put their bid in for the 6’7″ 240 lb defensive end. You read that correctly.

I don’t think there is much I have to say about this kid. Those who are familiar with him know he has much potential. He can’t help but to be a great name in the game at his size and age. He has the heart and hustle to go with it.

When I watched his film I noticed that he definitely is every bit of the size they have him listed. He uses that to his advantage very well. He has a very wide wing span that is keeping most kids his age off of him. You just don’t find many kids built up like him. He has some nice plays that show his potential. He can be a guy that get to the backfield every play. He is strong so he can use that strength to blow linemen up every play.

With him being so young he definitely needs some work. As he loses more body fat and gains muscle he will advance more. You just cant teach a kid how to be 6’7″. I would like to see his footwork improve as well. He is just 13 or 14 so he has plenty of time to be one of the biggest names in the nation if he puts the work in.

“When he gets coached up more he will be a monster,” said Coach Lindsey. MS Wolfpack head coach.