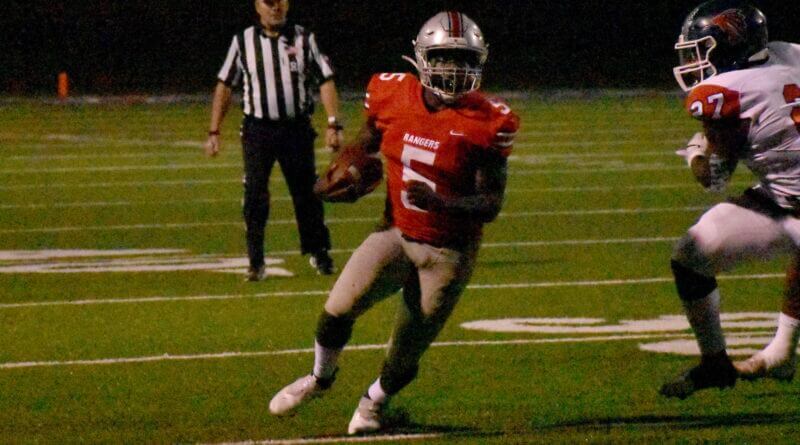 SENATOBIA — For the majority of Thursday night, the Northwest Rangers simply had their way offensively. Michael Hiers put together a strong first half through the air while Jaquerrious Williams later broke Justin Crawford’s school record for career rushing touchdowns, highlighting a 41-13 MACCC North Division win over the Itawamba Indians.

Williams finished with 115 yards on 19 carries, scoring all three of his rushing touchdowns in the second half and putting his career total at 31. Through the air, Hiers completed 17 of 21 passes for 209 yards and two touchdown passes. E. Jai Mason and D.T. Sheffield both combined for 155 yards on 13 catches through the air.

Defensively, Sam Brumfield and Kylan Robinson led the Rangers with a combined 19 tackles with Bryon Pearson getting an interception, the unit’s only turnover. Northwest made Itawamba’s offense one dimensional throughout the night while their own offense clicked early and didn’t look back on homecoming night.

The Rangers scored on three of their five possessions in the first half, including back-to-back drives right out of the gate. Jamarien Bracey got the scoring started with a five-yard score before Northwest capped off a 97-yard drive with a perfect over the shoulder grab by Sheffield. At that point, Northwest had a 14-0 lead, just under a minute into the second quarter.

After a bad third down exchange ruined their third drive, Hiers went right back to work and later found Jacoby Jones for a 34-yard post route touchdown. With 7:06 left in the first half, the Rangers had a commanding 21-0 lead. ICC followed that up with their best drive of the night and reached the Northwest 25, but would turn the ball over on downs due to excellent coverage from Bryon Pearson. Northwest kept the three-score lead going into the locker room.

Williams then began his dominant second half with a 50-yard score barely touched, giving Northwest a commanding 28-0 lead just over two minutes into the third quarter. The Indians would get their first points of the game with an RJ Wilson touchdown on the following drive, but Williams added another score on the goal line to once again made it a four score lead with 3:40 left in the third quarter.

Backup Northwest quarterback Jackson Allen succeeded Hiers on a few drives in the second half before Itawamba found some more offensive success again midway through the fourth quarter. Jamal Brooks scored a goal line touchdown, but still trailed Northwest 34-13 with 8:35 left to play.

With ICC backup quarterback Hunter Jones in the game late, Pearson came up with an interception to set Williams up for his record setting score. Williams took a handoff right side, dove for the pylon and put the final nail in the coffin at Bobby Franklin Field.

The Rangers will cap off the 2021 regular season at Mississippi Delta while Itawamba hosts East Mississippi on Thursday, October 28.