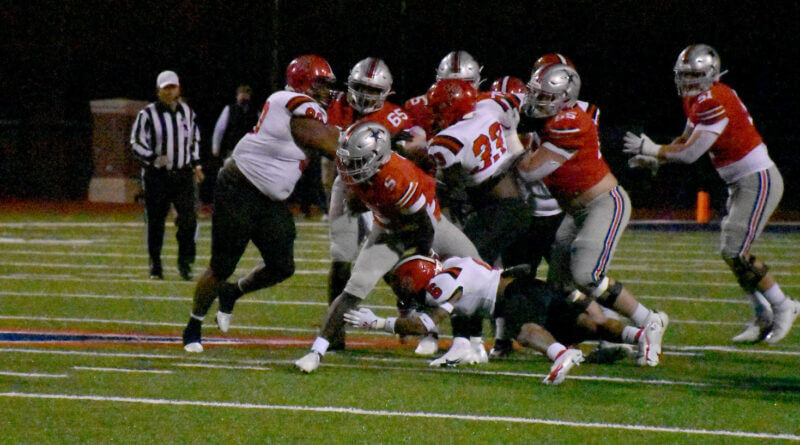 (Northwest running back Jaquerrious Williams carries the football while dragging defenders for a first down. Photo courtesy of Jared Redding.)

SENATOBIA — In a season filled with uncertainties, it is certain that the Northwest Mississippi Community College Rangers are the best JUCO football team in north Mississippi.

The No. 7 ranked Rangers (5-0) bullied on the line of scrimmage and knocked off the Mississippi Delta Trojans 44-6 at Bobby Franklin Field on Thursday. Northwest finishes the regular season with a perfect 5-0 season and win the MACCC North division for the second consecutive year.

In one of their best performances of the season, the Rangers totaled 537 yards and 24 first downs. Michael Hiers completed 11 of 16 passes for 244 yards and three touchdown passes.

Northwest ran the ball by committee. Kenyatta Harrell led the team with 133 yards on 18 carries while Jamie Shaw, Jaquerrious Williams and Randy Anderson combined for 159 on 22 carries with two second half scores from Anderson and Harrell.

Defensively, Kylan Robinson led the Rangers with eight tackles and a sack, followed by Desmyn Baker’s six tackles. Michael Campbell and Byron Pearson each had five tackles. In total, the Ranger defense gave up 146 yards on 46 plays.

In their second matchup with the Trojans, Northwest left little doubts from the opening kickoff.

After fumbling away their opening possession, the Rangers scored on consecutive possessions. Michael Hiers found Jaquerrious Williams on a screen pass and Williams raced 80-yards to the end zone to draw first blood with 7:58 left in the first quarter. The Trojans responded with a touchdown pass of their own. Freddie Byrd eluded pressure and found Lorenzo Perez for a 38-yard pitch and catch. Following a failed two-point try, Northwest led 7-6.

Jamie Shaw dominated on the following drive with a few powerful runs and capped off the drive with a nine-yard touchdown run late in the first quarter. Tucker Barefoot later followed up his missed 49-yard field goal with a 35-yarder to give the Rangers a 17-6 lead with 7:35 left in the first half. Northwest blocked the Trojans’ punt on the ensuing drive and the Rangers had a chance to bust the game open with 1:23 left in the half. One play later, Hiers found Keyon Fordham on a slant and he found the end zone, giving Northwest a 23-6 halftime lead.

The Rangers did not let off the gas, scoring on every single second half possession while not allowing a single point the rest of the way. D.T. Sheffield found the scoreboard midway through the third quarter on a 49-yard touchdown catch and run with Randy Anderson and Kenyatta Harrell cleaning up the rest of the way.

Northwest will travel down Perkinston, Mississippi for a postseason rematch with Mississippi Gulf Coast for the MACCC Championship game. Kickoff is December 5 with time to be determined.