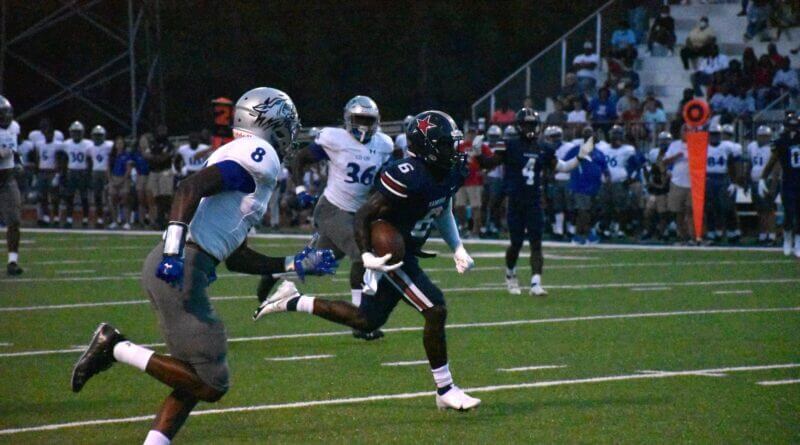 SENATOBIA — It took a little while, but the defending national champions made it clear who the
better team was Thursday night.

The No. 3 ranked Northwest Rangers used a string of four consecutive drives to pull away from
the Copiah-Lincoln Wolfpack and finish with a convincing 31-12 victory at Bobby Franklin. The
win pushes Northwest’s winning streak to seven consecutive games, dating back to last
season’s opener.

Quarterback Michael Hiers began his second season as a Ranger in style, going 16-27 for 308
passing yards and two touchdown passes. DT Sheffield was responsible for 124 of those yards
on four catches, including a touchdown. Jaquerrious Williams led the Rangers in rushing with 89
yards with Jamie Shaw and newcomer Jamarien Bracey combining for 83 yards and a
touchdown apiece.

In total, the Rangers out gained Co-Lin 436-153 offensively.

Defensively, Northwest was led by Sam Brumfield with eight tackles, followed by Kylan
Robinson with six. In total, the Rangers surrendered just 12 first downs and two touchdowns off
short fields due to special teams errors. Other than, Northwest dominated the night.

After the first four drives of the game came up empty, Northwest drew first blood with a goal line
touchdown by Jamie Shaw. The Rangers led 7-0 with 1:15 left in the opening quarter.

Fast forward to the second quarter, a bad long snap gifted the Wolfpack an opportunity on
Northwest’s 15-yard-line. Co-Lin seized on the opportunity with a 12 yard score by freshman
Bobby Shanklin, but a unsuccessful PAT allowed Northwest to retain the lead with 7:11 left in
the first half. Two Northwest drives later, the Rangers went 75 yards in three plays to find the
end zone. Hiers hit Keyon Fordham from 27 yards out to give the Rangers a 14-6 lead going
into the locker room.

That momentum carried over into the second half as the Rangers came away with points on
their next three possessions. Northwest again used just three plays coming out of the locker
room as Hiers rolled out to hit DT Sheffield, who broke two tackles en route to the end zone.
Sheffield’s 59 yard score gave Northwest a two possession, 21-6 lead a minute into the second
half.

After the Ranger defense forced a turnover on downs, Jamarien Bracey scored his first career
touchdown from two yards out while Eli Hamlin connected on a 22 yard field goal to begin the
fourth quarter. Northwest had a commanding 31-6 lead with 14:10 left in the contest. Co-Lin
would add a late touchdown pass by Paul Hargrave to Harold Rhodes, but it was far too late for
the Wolfpack.

The Rangers will hit the road for the next two weeks, starting with a trip to Ellisville to take on
MACCC South Division foe Jones College. Meanwhile, Co-Lin will travel to Fulton to take on
Itawamba. Both matchups are set for Thursday, September 9 with games kicking off at 7 p.m.
and 6:30 p.m. respectively.