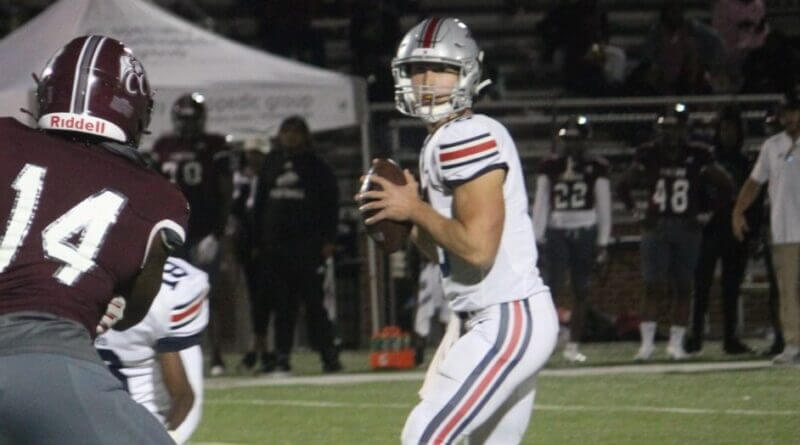 Photo: Ren Hefley passed for six touchdowns in a 44-21 win for Northwest on Thursday night, becoming only the fourth Ranger quarterback to ever accomplish that feat. (www.nwccrangers.com)

Third-ranked Northwest to host Holmes for Homecoming next Thursday

Facing a Coahoma team desperately seeking an end to a three-game losing skid, No. 3 Northwest gave the Tigers no real chance to pull off an upset in Thursday night’s 44-21 victory.

For the third time in the last four games, the Rangers totaled 500-plus yards of total offense, finishing with 510 on the evening. Many of those came through the air, where Ren Hefley passed for a career-high 317 yards, while completing 20 of his 27 pass attempts for six touchdowns. The Little Rock native and Presbyterian College transfer became one of only four Northwest quarterbacks to pass for six or more touchdowns in a single game, joining Will Hall (9 TDs vs. East Mississippi; 10/27/2000), Bobby Robison (6 TDs vs. East Mississippi; 10/19/2002) and Jack Walker (6 TDs at Holmes; 9/26/2019).

With the win, Northwest improved to 7-0 on the season and 4-0 in the MACCC North, while the Tigers suffered their fourth straight loss and dropped to 3-4 overall (1-3 MACCC North).

Northwest wasted no time scoring on the game’s opening drive. The Rangers converted two third down attempts on an eight-play drive, culminating in a short five-yard touchdown reception from Hefley to Sheffield, giving Northwest a quick 7-0 lead.

After the Rangers forced Coahoma into an empty-handed possession, Northwest got the ball back and scored six plays later, as Hefley found Mason for an 18-yard score. Despite missing the point-after kick, the touchdown helped the Rangers stretch their lead to 13-0 late in the opening quarter.

Coahoma once again failed to cross midfield on its next possession, as the Rangers forced another Tiger punt. From there, Northwest carried over a 14-play, 68-yard drive from the first quarter to the second, ending in a 23-yard field goal for Eli Hamlin, pushing the lead to 16-0.

Although the Tigers moved the ball well on their next drive and scored on a 33-yard rush from Jakobi Jackson, Northwest responded with a six-play possession that ended with a short touchdown pass from Hefley to Sheffield. Hamlin’s PAT widened the gap to 23-7 with 6:42 left in the first half.

Coahoma responded once more on a nine-play, 80-yard drive that ended with another Jackson touchdown, this time from 11 yards out. However, a solid 54-yard kick return from Leon Elloie set the Rangers up in excellent field position, later resulting in a 12-yard scoring pass from Hefley to Mason just before halftime. The late touchdown gave Northwest a comfortable 30-14 lead at the break.

Coahoma started with the ball to open the second half, but a three-and-out from the Northwest defense forced the Tigers to punt. Eight plays into the Rangers’ first possession of the second half, Hefley connected with Diaz on a 16-yard floater into the back of the end zone, pushing the score to 37-14.

Things went from bad to worse for the Tigers throughout the rest of the third quarter, as Coahoma just couldn’t get anything going on offense. On the other hand, Northwest closed out the third on a seven-play, 64-yard drive that ended in another Sheffield touchdown and a 44-14 score.

Coahoma added one final score midway through the fourth quarter, closing out a 14-play, 82-yard drive that burned nearly five minutes of clock. By that point however, the game was well in control for the Rangers, setting up Cayden Betts and Cam Young to burn the final 5:12 off the game clock.

Speaking of the ground game, Northwest collected 193 rushing yards, led by 85 yards from Betts. Freshman Xavier Davis collected 67 rushing yards, while Young added 37 of his own. Meanwhile, a bulk of Coahoma’s yards came from the Tiger tailbacks, led by 93 yards from Jackson and 48 from Jaden Johnson.

Coahoma also ended the contest with just over 100 yards passing, as Johnson went 11-for-21 with 104 yards and a touchdown. Livingston Coaty edged Marquis Willis as the Tigers’ leading target, earning 38 and 37 yards, respectively.

Josh Hollins was busy punting for the Tigers all evening, finishing with 181 yards on five punts. Shade Foster only punted twice for the Rangers, combining for 59 yards.

With the win, Northwest improved to 45-2 all-time against Coahoma, earning its 12th straight win against the Tigers since 2009. The Rangers will now turn their attention to Thursday, October 20 for Homecoming and the regular season home finale against Holmes. The Bulldogs (4-3, 3-2 MACCC North) have won three of their last four games, most recently earning a 48-6 victory against Mississippi Delta.

Kickoff for Thursday’s game is set for 7 P.M. at Bobby Franklin Field, with the presentation of the Homecoming court at halftime. Pregame coverage begins at 6:30 P.M. on Ranger TV (nwccrangers.com/watch), WHCQ-LD 8 and Action News 5 Plus.