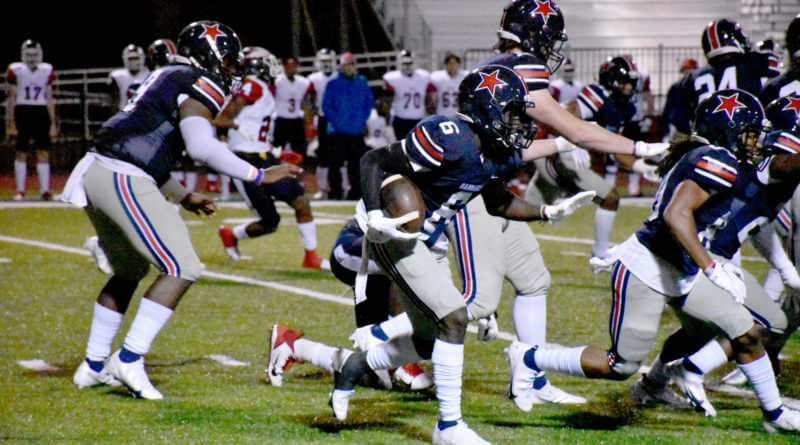 SENATOBIA —It took a little longer than Northwest Mississippi Community College wanted to, but the Rangers are winners for the first time in 2020.

The Rangers (1-0) scored early and hung on to defeat the Itawamba Community College Indians 16-14 at Bobby Franklin Field on Thursday.

On the ground, Jaquerrious Williams led the Rangers with 61 yards on the ground on 17 carries. Defensively, Northwest was led by Nijel McGriff and Kylan Robinson, who each had 13 tackles.

Despite kicking off to start the game, it didn’t take long to put the football in Michael Hiers’ hands with Kevin Wilson picking off ICC just two plays into the game. Tucker Barefoot capitalized with an easy field goal to give the Rangers a 3-0 lead with 10:54 left in the first quarter.

Hiers followed that up with two touchdown passes on the following two possessions. He hit freshman D.T. Sheffield in the flat, who found the end zone from 21 yards out to give the Rangers a 10-0 lead. After another defensive stop, Hiers found Fordham open on the visiting sideline and hit him for a 73 yard scoring strike. Following a failed PAT attempt, the Rangers led 16-0 with 2:05 left in just the first quarter.

The rain began to impact the second quarter as no offense was able to be found going into the locker room at halftime. After a defensive third quarter, the Indians finally found life.

ICC quarterback Loden Bolen found his receivers at the first down markers, moving down the field. The Indians finally got on the scoreboard early in the fourth quarter as Tyler Day found the end zone, cutting Northwest’s lead to nine, 16-7 with 13:39 left in the game.

Following a three-and-out, Bolen connected with Qua Davis on a screen pass and raced 59 yards to the house which made it a 16-14 ball game with 8:10 left. Northwest had good field position on the ensuing kickoff, but all to no avail as Barefoot’s kick went wide right, giving Itawamba a chance with 6:33 left.

After a pair of third down conversions, the Indians made their way to the Rangers 30-yard line. After a few shaky offensive plays, Shane Lasher attempted a 47-yard field goal. The kick was partially blocked by Northwest’s Rayyan Buell as time expired.

The Rangers return the field on October 22 when they travel to Northeast Mississippi Community College to take on the Tigers. Kickoff time is set for 6:30 p.m.