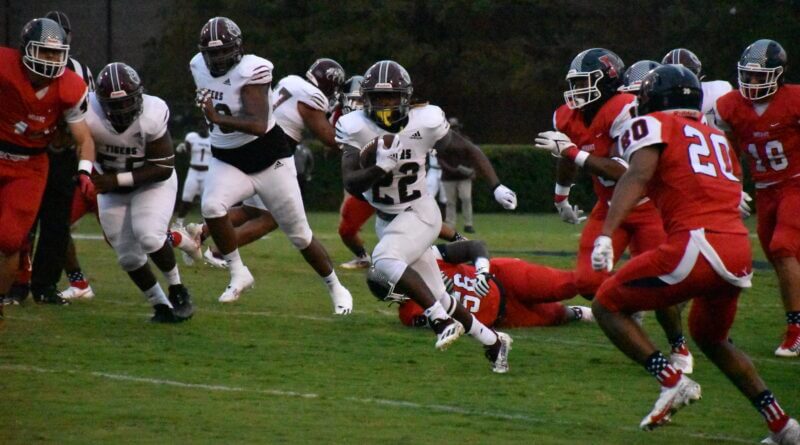 FULTON — Itawamba backup quarterback Hunter Jones stepped up in a big way in the first half with a pair of touchdown passes in the second quarter, but it wasn’t enough at the end of the night. Coahoma Community College took advantage of two second half turnovers and held on for a 22-20 MACCC North Division victory over Itawamba Community College at Eaton Field.

A high-flying Indian offense was silenced for the majority of play despite three combined touchdown passes. The Tigers scored through the air, on the ground, on special teams and even defense in Thursday’s North Division opener while making fewer mistakes down the stretch.

In the beginning, it was Coahoma drew first blood after forcing a turnover on downs. Quarterback Mekhi Norris used the short range passing game and converted a 4th-and-19 to set up a nine-yard touchdown pass to Kobee Lockett on the run. Following a failed PAT, the Tigers had a 6-0 lead with 3:37 left in the opening quarter.

ICC starting quarterback and reigning MACCC Co-Offensive Player of the Week Dylan Faulk left the game on the following drive with an apparent injury scrambling. Jones stepped in and later threw his first career touchdown passes, six-yard and 57-yard scores both to Shamar Sandgren that gave the Indians a 14-6 lead with 11:23 left in the second quarter.

After five consecutive punts between the two teams, Norris and the Tigers drove to the ICC 23-yard line under a minute left in the half. On 4th down, the Indians gave Coahoma new life with a pass interference call that put the Tigers inside the 15-yard line. With no timeouts left and the clock running underneath 15 seconds, the special teams unit lined up just in time for a 20-yard field goal by William Payne as the first half expired.

Faulk returned to the field in the second half to lead the Indians into Tiger territory, but turned the ball over on downs shortly thereafter. With 6:23 left in the third quarter, Faulk’s inside screen pass was tipped and intercepted by Coahoma’s Robert Spearmon at ICC’s 39-yard line. The Tigers cashed in on the turnover, with Jakobi Jackson eventually scoring untouched from four yards out. Following anther failed PAT, Coahoma had a 15-14 lead with 3:31 left in the third quarter.

The Indians responded with another methodical drive that made its way into the Tiger red zone, but a 26-yard loss on a bad snapped killed the drive and forced Itawamba to punt the ball away near the end of the third quarter.

On the first play of ICC’s next offensive drive, Faulk’s pass in the flat was jumped by Reginald Jackson and taken 20 yards the other way for a pick six. The defensive score gave the Tigers a 22-14 lead, their biggest lead of the night with 14:04 left to play. With good field position following a Coahoma punt in the shadow of their own goal post, Faulk and the Indians finally broke through. Faulk found RJ Wilson in stride, wide open for an 18-yard score, however, an incomplete pass intended for Chris Howard fell incomplete on the two-point conversion.

The Indians had a chance to win it 75 yards away with 2:42 left to play, but a sack and bad snap had them face a 4th-and-25. Faulk completed a pass to Wilson, but it was well short of the first down marker, sealing the game for Coahoma.

The Tigers return to Clarksdale Saturday, September 25 to face Mississippi Delta while ICC looks to rebound at home against No. 10 ranked Jones County.