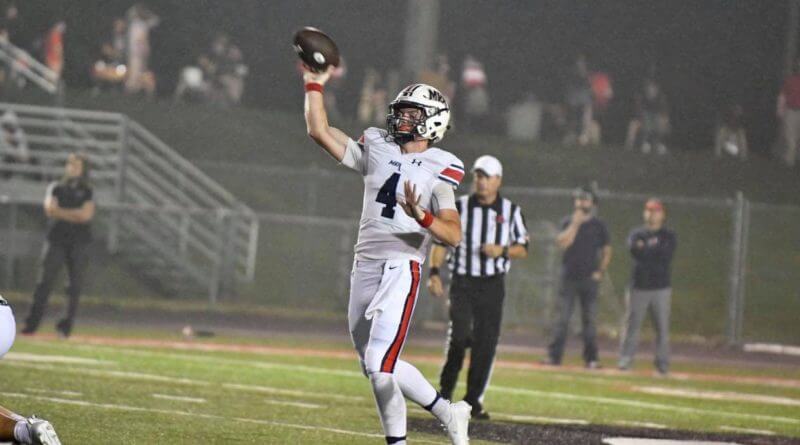 Friday night’s matchup between defending 4A MHSAA champion Corinth and defending 6A MAIS champion Madison-Ridgeland Academy was a last minute schedule addition, with the Patriots of MRA travelling to North Mississippi as the Warriors homecoming opponent.

The two teams came in with a contrast of styles, the Warriors favoring methodical drives from their base wing-t offense while MRA came in with a balanced offensive attack that has relied on big plays throughout the season.

The Patriots big play philosophy paid dividends on Friday in a big way.

MRA is heading back to central Mississippi with a big 51-17 win in the battle of the champions to remain undefeated on the season.

After stalling on their opening possesion and trailing 3-0 behind a Eli Burciaga 34-yard field goal for Corinth, MRA rattled off 30 unanswered points thanks to a pair of big touchdown passes from Zach Beasley to Davis Dalton for 39 yard and 58 yards and pair of touchdown runs from Rayf Vinson.

Beasley would end the game with 5 total touchdowns, four through the air and one on the ground as he accounted for 367 total yards, connecting touchdown passes to Trey Zito and Street Toler in the second half.

MRA moves to 6-0 on the season while Corinth falls to 2-2. MRA is at home against Bay Springs next Friday while Corinth travels to Tish County.

More pictures of MRA on the Missisisppi Sports Facebook page.