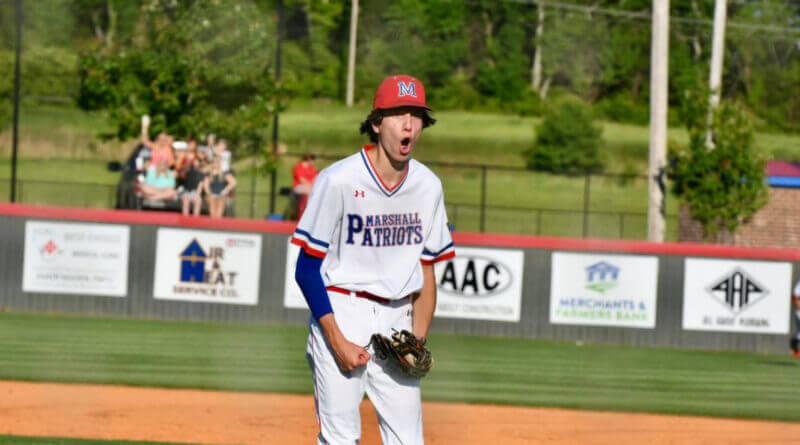 The Marshall Academy Patriots are headed to play for a state title after picking up a back end sweep over the visitors from Kirk Academy.

After dropping the first game of the series 4-1, the Pats put on an offensive showcase, winning the final two games by scores of 11-6 and

Marshall Academy tallied extra base hits in the winning effort.

“We went out trying to win every inning. That was our goal, and for the most part our players delivered,” Patriot head coach Bruce Branch said.

The Patriots blew the first game open between the 2nd and 3rd innings, when MA outscored Kirk 7-1 highlighted by an RBI double and RBI single from Jamie Graves and RBI singles from Jack Smith and Colton Atherton.

Marshall Academy had a stellar defensive performance in the Game One victory, with shortstop Rusty Bolden making several key plays.

Jackson Graves got the victory in the first game, striking out 9 in 5.1 innings. Bolden came in to record the final 5 outs, 4 of which were by way of strikeout.

Jordan Bonds and Walker Sanders added game one doubles while Atherton led at the plate with a homer to go with his double and 4 RBI. For Kirk,  Hathcock (2) and Jacob Habig had extra base hits with Hatchcock leading with a trio of base knocks.

The second and deciding game saw both teams combine for 16 hits, but the Patriots again relied on extra base hits in key spots to take the game and the series.

Bolden, Devin Sanders and Walker Sanders (2) each contributed doubles while Landon Houston launched a solo home run in the bottom of the third.

Hunter Peeks drew the start on the mound, striking out a pair in 3.1 innings. Bolden again came in to pitch in relief, while Atherton got a 5 out save striking out 2 and surrendering 1 hit.

Marshall Academy moves on the MAIS title game series with a record of 30-3. Kirk Academy closes their season at 18-14.