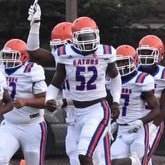 LaKendrick James picks up his first D1 offer from Miss State. He is a 6’3″ 215 pound DE/OLB from Northside.

There is a lot of talent in the Delta and Lakendrick James is amongst that number. He has a lot of athleticism. Kendrick runs a 4.58 in the 40.

Kendrick does very well on the field. He has recently posted a film where he caught a one handed catch at tight end. On this one particular play you can see his true athleticism as he stretches out to catch the ball.

I think Kendrick can be a guy that plays a hybrid LB position. With his speed he can learn to cover a tight end and has the size to drop down in a three point stance and rush off the edge. He is very long and uses his natural ability to make plays.

James is also a major force in Northside rush defense. He can hold his ground and not get ran off the line causing disruption on the linebacker level.

“It’s a blessing to get this offer coming from the Delta,” said LaKendrick. “I’ve never felt anything like this before. This off-season I plan on working to get bigger and stronger!’