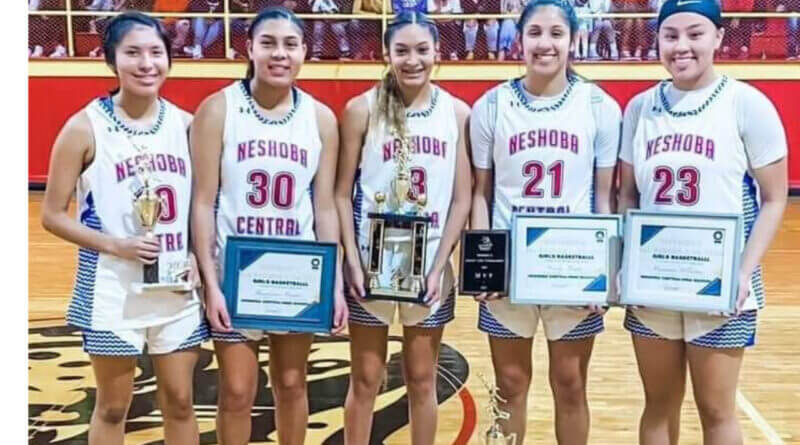 Philadelphia — “There’s a lot of comfort between the girl’s in their ability. A lot of times that carries over into game day.” You can hear the confidence in Coach Jason Broom’s Voice. We were able to have a very exclusive interview with Coach and his whole team.

The ladies were very shy talking to us, but that kind of reflects in their game. These girls aren’t flashy, they don’t talk much smack, they just show up and handle business. They are on a 29 game winning streak and undefeated this season. It is hard to predict anybody to beat them the way they are playing right now.

Neshoba Central has a extraordinary starting five. Denise Denson, Veronica Williams, Carly Keats, Shalynn Hunter and Hama’ya Fielder are all very exceptional in their own way. Fielder and Keats will be playing in the MS/AL Game.

Hunter will be playing in the MAC North South Junior Game and Williams will join us at Valley (Miss Valley State) in the Magnolia State All Star Game. When your team goes undefeated you deserve to have four all stars from one team. They have been hot on social media all season. There is a viral video of Shalynn Hunter rocking an opponent to sleep before she jacks a buzzer beater three from NBA range.

“We try to make sure we play well together. We concentrate on communicating on the court and since we all know each other the chemistry is there,” says Hamaya Fielder, the two sport athlete who also excels in softball. These girls have been playing together since the Booker T League of Philadelphia, MS.

“I remember when we played them last year. There was no point in playing defense on these folks,” were the words of Lauren Harges on a Facebook post earlier. It kinds of gets frustrating for an opponent if you are running back to get on defense and the opposing team drains a three soon as they cross half court. These girls could be at the Silverstar Casino and still hit shots.

At the beginning of the season it was a lot of doubt from people outside of Philadelphia in these ladies. Some thought it was hype. Lately across social media the doubts have started to fall. There is no hype to the Neshoba Central Lady Rockets. They are true grim reapers who come take your soul in the middle of the night.

“The good thing about basketball is that you can have the worst record on the season, make the playoffs or have the worst record and make the playoffs. Right now it’s win or go home so we take every opponent serious!” Coach Broom let it be known they are taking every team serious even after “sweeping” everyone during regular season (pun intended).

During the playoffs everybody is ready to face a team like Neshoba. True competitors want the best. That’s one thing that has helped Neshoba along the way. They have played teams of all talent levels from 1A-6A.

“We’re not going to reinvent ourselves. We just got to keep being who we are,” says Coach Broom when I asked about their plans to begin playoffs Friday. “We’ve played some of the best competition in the state. I feel we are tried and true.”

West Jones, Columbus, Lafayette and Vicksburg have been playing great ball this year as well. 5A is looking to be in Neshoba’s favor, but the game has to be played. It’s any given night in the playoffs. They just have so much depth on the team. I spoke highly of the starting five, but the players off the bench add a lot to the team as well.

“Our competition level in practice is top notch. Our depth keeps us level and that helped us not to peak too early in the season. These girls dont cut each other any slack,” Coach Broom sounds real confident headed into their first playoff game of the year.

“Our games are a lot easier than practice,” says Coach Broom when speaking on his girls and their confidence.

“We’ve had a lot of repeat visits from recruiters. That has resulted in them seeing some players they aren’t aware of!” Coach Broom says that his girls have a lot of looks. Carly Keats is committed to Jones and Denise Denson is committed to Holmes. They have more announcements coming later.

The 7th and 8th grade girls team haven’t lost in quite some time. Years to be exact. The future definitely looks bright for the Neshoba Central Lady Rockets.

This Friday the Lady Rockets host Lake Cormorant in Philadelphia, MS. Tip off is set for 6pm. Time has been moved up from 7pm. I will be covering this game. Keep up with updates on Twitter.