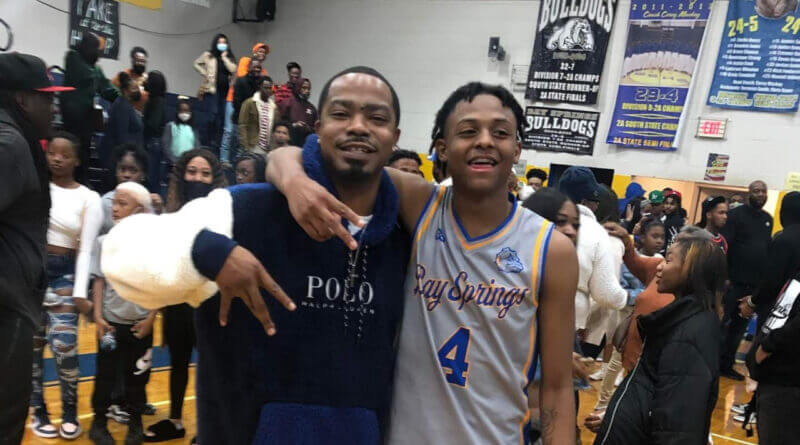 BAY SPRINGS — “They know if they don’t play defense they don’t get to play!” Coach Mackey had his defense ready to play tonight. That’s what got them the close 63-61 win over McEvans last night.

The trash talking in MS High School Sports Page between these two teams was CLASSIC since each team found out who they would face in the 3rd round. I saw McEvans get called “McSlaw” and I say Bay Springs get called “Bed Sprangs”. I purposely didn’t announce what game I would cover and even told each fan base I couldn’t make it, but our loyal supporters knew I would be there.

It was the third round of the playoffs all across the state. So that means teams will be bringing their all. I have seen so many close games since the district tournaments started and was able to catch another tripper last night.

The first few minutes started out great for McEvans. They were moving the ball well and jumped out to a nice 7 point lead. Things would change very fast from there, though.

After calling their first timeout Bay Springs came out on fire. They ended the first quarter and started the second with a 15 point run. The Bulldogs had jumped out to a 12 point lead in the results of that.

The man to man defense and full court defense was a problem for the Warriors in the first half. They were turning the ball over a lot and couldn’t get up many shots. The game was all Bay Springs and was looking like they were going to run off on the Warriors.

McEvans missed 14 free throws last night. If I had to place my hands on a reasoning for their loss I would say that was it. It was a double digit game all the way til the fourth quarter.

Tashun Pierce and his Bulldogs were doing all they could to hold on to the win. He had 22 points and was very disciplined as the Bulldogs held off the Warriors.

“I was in the gym two hours a day, preparing for my team,” were Pierce’s words on his relentless play last night.

Jalen Smith from McEvans had something to say about that double digit lead. As a matter of fact he had thirty one different things to say last night as he set a career high of 31 points. He scored amajority of the fourth quarter points for McEvans.

With 5 mins left in the game McEvans had brought the game back to a five point lead. Their fans were going crazy. They had been in the gym loud all night even during their deficit. A TRUE loyal fan base.

With 3:03 seconds left in the game the score was 55-52 Bay Springs. The Warriors were cracking down on that lead and now we had a 3 point game.

With less than two minutes left in the game the score was 59-57. Everyone was on their feet. A lop sided game had instantly turned into a thriller. Just like that we had an instant classic on our hands.

By the time the clock had got under a minute left in the game Bay Springs found themselves up 61-59. A turnover lead to Jalen Smith getting two points and the Warriors had tied the game at 61.

The Bulldogs Chad Jones had the ball at the top of the key. His hair flowing with the wind as he sets up to get to his spot for the jumper.

Nothing but the draws of the net. The Bulldogs had taken the lead with 16.9 secs left on the clock. “FIRE IT UP BAY SPRINGS FIRE IT UP. AAAAAYYYYE!” That’s all you could hear at that point.

McEvans had a chance, but turned it over as the time was running out. The Bulldogs held on to win the game. They advance to the Big House to face Biggersville in the final four.

Tip off is set for Monday at noon.