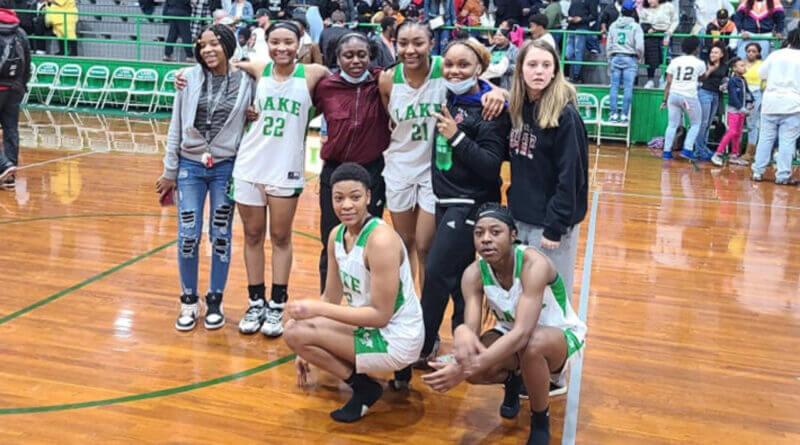 LAKE — “We had to make a few adjustments to win the game. We had a few girls in foul trouble and I knew it would come down to the last minute!” Coach Maurice Bowie for the Lake Lady Hornets relied on his defense tonight. They were very stingy during their 50-45 win over Newton.

By now I’m sure you know we follow some of the biggest games for trash talking across the state on social media. There was a lot of it this week for the cross-county rivalry of Lake vs Newton. A lot of people didn’t think Newton had a chance, but they played a great game.

By the end of the first quarter the score was 19-6 Lake. They were blocking shots left and right and Brooklyn Harris led the bunch in that category with 6 blocks. She was tough in the paint and on the perimeter.

“Coming in this week I knew I had to stay focused and do what I do. Blocking shots is what I do,” said Harris after the game. The junior has a long frame and is a great defender for the Hornets. Their defense tonight is what helped them to prevail to win the game.

Newton wasn’t going to give up too easy. Zia Shields and crew were ready to play some ball in the second half.

The Lady Tigers started the second half off fast and getting to the hole. Zia Shields finished the game with a few steals and that helped lead to some great defense for Newton in the 3rd quarter.

The Lady Tigers finally took the lead 38-36  with a couple minutes left in the 3rd quarter. Newton had finally found a groove.

It was VERY LOUD in the gym. I expected that when I first made it to the game. I didn’t catch tip off so by the time I arrived there was a line all the way to Philadelphia at the door.

You could hear chants from both sides of the gym. With a tied ball game neither fan base had a reason to be shy so when one got loud the other one would try to get louder. Yes cliché by now, but this is what I came to see.

Both teams started out the same way they started the second half. Fast and playing good defense. However with 5:52 left in the game Lake had regained the lead.

“We knew with foul trouble that whoever played next would have to be ready. We have depth. The first half they were good with breaking the press so in the second half we went with man to man and were still able to stop the easy layups” said Coach Bowie. His girls adjusted very well to his second half plan, but the the Lady Tigers of Newton were still sticking around.

With 1:34 left in the game Newton hit two free throws to make it a tie game at 45 all, but that would be the last time they scored. Zia Shields fouled out on what Newton felt was a questionable call and that killed their spirit.

he student section was going crazy and the Lady Hornets were very excited. I’m glad I got to witness this game. The Lady Hornets go on to face New Site, Tuesday at 10:30am.