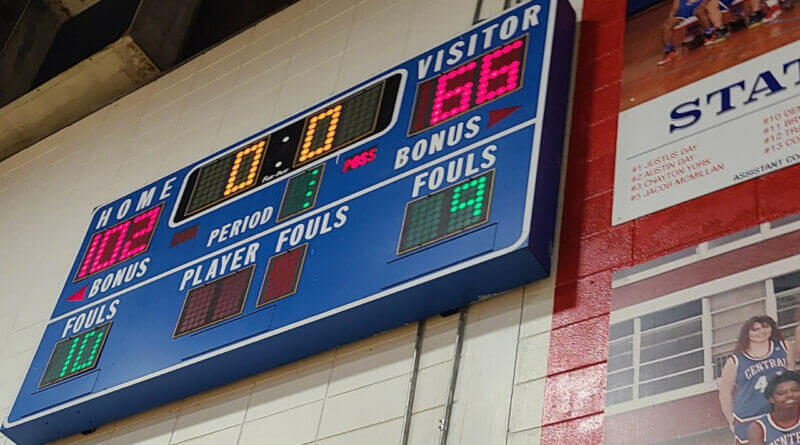 Philadelphia — “WE WANT THE ONE!” Shouted Hama’ya Fielder from the bench as second team approached 100 points. It was a historical night in Philadelphia, MS. I watched the Lady Rockets score one hundred points to defeat Lake Cormorant 102-66.

They started out fast. Hama’ya Fielder started the game with a quick two and a three that only touched the bottom of the net. “Very proud of our bench for the way they play tonight. We always” said Fielder after we caught up with her after the game. She finished with 28 points.

The bench players added on 36 points tonight. Coach Jason Broom has spoken very highly of them in the last two days and he did so again tonight. “If our starting five is ranked number one in the state our second team is ranked number two. Our starting 5 is definitely not undefeated in practice!”

“All during practice we just worked with our second team. Just on different things getting them prepared for the next game,” Hama’ya Fielder added on the bench scoring 36 points. That’s the kind of leadership that shows through their game. You can see it on the court when they play. Communicating is something you don’t see a lot of in younger players and this team does it well. Even the ones who come off the bench.

Zharia Flores scored 15 points off the bench tonight. She was a major plus for the second team.

It was just unfair at times tonight. When the second team came off the bench almost three minutes left in the first they added a quick ten points. They didn’t miss a beat as the starting 5 got some rest. Coach Broom was substituting all 5 of his starters at some points in the game tonight.

Veronica Williams added on 10 points and was very tough on defense tonight. She doesn’t say much but she gets after it on the court.

Shaylynn Hunter was easy like Sunday morning as usual. Doing her normal yo yo tricks with the ball. She had a nice behind the back crossover that led to a smooth two points tonight. She had 6 points tonight.

Carly Keats was hot from the three point line tonight as well. She had 13 points.

“I have a bunch of young players who haven’t been in an atmosphere like this,” said Coach Neely (Lake Cormorant). Lake Cormorant made a lot of mistakes tonight. The only hot hand they had was Ja’Keria Hawkins who went for 50 points. A career high for her. She was beyond amazing tonight!

The future looks bright for Lake Cormorant, but it is hard to advance when you have to face the undefeated Lady Rockets.

The second half started off fast again for Neshoba. Quick threes and easy layups. Their defense was very tough tonight as well. “These girls are used to me running them hard. We did a lot of one on one man to man drills this week. We finally let up on them around Wednesday and they looked to have their legs back under them today,” said Coach Broom when we talked about their play defensively tonight.

It was amazing to be able to attend this game tonight. What these young ladies are doing this year will be remembered for decades in MS and it would be nice for them to add a championship ball to their trophy case.

The fans were very nice tonight. Neshoba Central has some of the best fans in the state and they know how to host a game. Great music was being played and a lot of smiles in the crowd.

There is a lot to be proud of during basketball season with the Lady Rockets playing the way they are. They had four players to score double digits tonight. You will always have a chance with numbers like that.

They go on to play Vicksburg next Friday in Vicksburg. Tip off is set for 7pm!