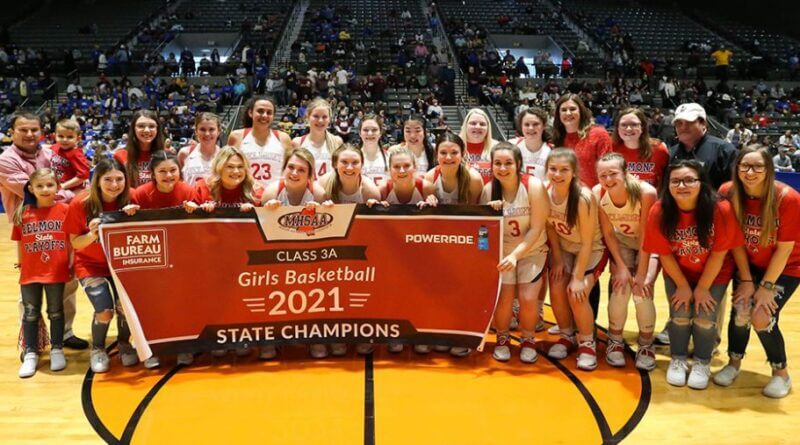 Belmont won the 3A state championship 56-55 over Kossuth at the Mississippi Coliseum in
Jackson, Miss. Belmont/Kossuth clinched their 12th state title in school history. Belmont was
paced by senior player of the game Macie Walker’s 29 points. This was both teams first
appearance in the state title game since 2019 where Kossuth defeated Belmont to win their first state title.

“Macie is a great team player,” Higginbottom said. “She has all kinds of accolades for her stats
and all that, but her goal this year above all else was to win a gold ball. She had the desire, and
she led our team to be able to do that today. Her leadership is why we’re state champions.
Belmont opened the game on a nine to nothing run behind three consecutive three point baskets.

That run would be the only scoring for the entire quarter as Kossuth was held scoreless for the
opening frame.

The Lady Aggies stormed back in the second quarter behind seven points from
junior Zoe Essary and five points from senior Bailey Holt. Belmont was led by ten first half
points from Macie Walker, which was enough to give the Lady Cardinals a two-point halftime
lead. Freshman Brooklyn Hodum played a lot of minutes and made a lot of key defensive plays.

“The thing about Brooklyn is that she didn’t play like a freshman,” Higginbottom said. “She
played above a freshman level and being able to execute on the biggest stage is huge. The future is bright for her. This is a great starting point for her story, and that’s a big time shot. That’s oneshe’ll never forget for the rest of her life.”

Kossuth continued to hit big shots in the third quarter to carry a 32-31 lead into the fourth
quarter. Essary and Holt mixed inside and outside for the Lady Aggie offense. Macie Walker
continued to get buckets from all over the floor including a 30 foot three to beat the buzzer at the end of the quarter. She continued to be the difference. Her willingness as a passer is what won the game.

“I was driving, and it would have been an extremely tough shot for me to make,” Walker said.
“They were all over me and Brooklyn is a very, very good player. In three years, she’s going to
be an awesome player. I have to trust my teammates and I knew Brooklyn was going to make
that shot.”

Both teams traded enormous baskets down the stretch, but 32 minutes wasn’t enough for these teams.

Macie Walker had five points down the stretch and the game winning assist to Brooklyn
Hodum. Zoe Essary had 20 points and 11 rebounds for Kossuth. Kaitlyn Bonds finished with 15
points.

“I didn’t expect it at all,” Hodum said. “It feels good. I know how much it hurt these seniors
when they lost two years ago. I knew that I had to clutch up, and I knew that when I got the ball
that I had to shoot it.”