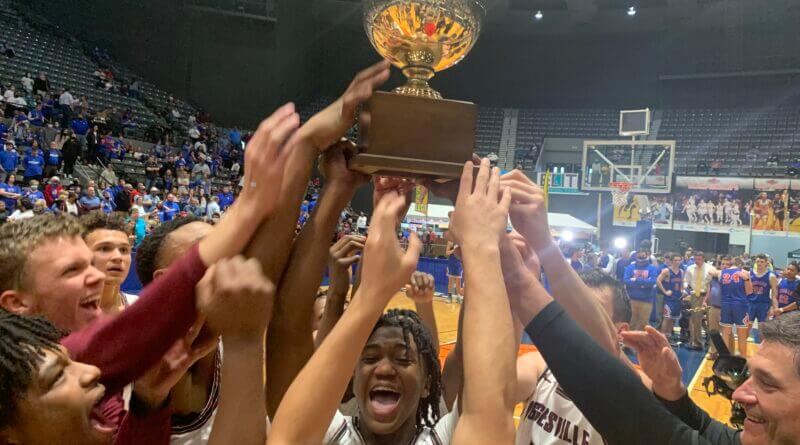 In a game that will go down as one of the best in recent memory, Cam Smith hit a buzzer-beating three as time expired to get Biggersville its first state title since 2013 with a 47-46 win over the Ingomar Falcons.

“I didn’t have time to think. Just make a play. I saw he overthrew it, I thought it was over. The ball came to me, and I shot it,” said Smith.

Just moments before, Zach Shugars of Ingomar hit what looked to be his second state championship game-winning shot in as many years with a 15-foot jumper from the right elbow.

However, officials deemed Biggersville called a timeout with three seconds remaining, which allowed the Lions to have a chance to chuck it deep.

The pass went almost out of bounds, but Brooks Brand made an excellent effort play to throw it back to Smith, who caught it just outside the three-point line and knocked down the shot as time expired.

At the beginning of the fourth, Biggersville seemed as if they were poised to roll over the Falcons with a 40-28 lead. However, Ingomar finished the game on a 16-5 run, including 14-2 to tie the game at 44-all with just over a minute left.

Biggersville took their first lead of the game at 5-4 early in the first and never really relinquished it until Shugars shot with three seconds remaining.

The Lions end their season at 24-4 and return to Biggersville with the third Gold Ball in the program’s history.

Ingomar finishes at 29-6 and comes up just short of repeating as state champions from last year’s game against Baldwyn.

Shugars was the game-high scorer with 24. Brand led the Lions with 16, and Smith added 15 points and the game-winning shot.