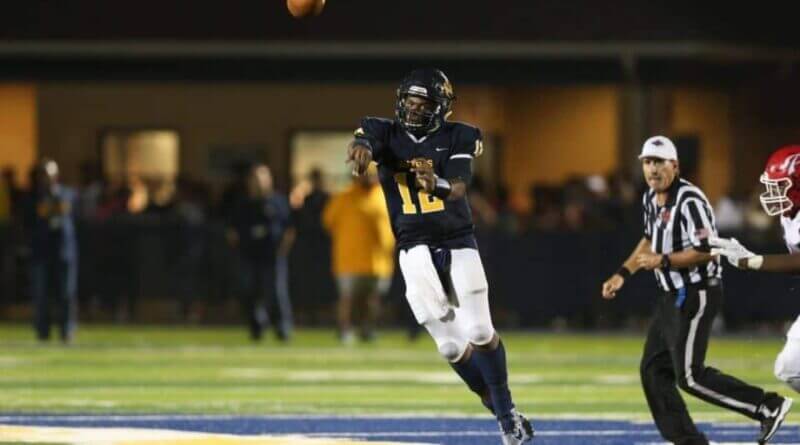 Kaden Irving holds it down for the coast by way of Gautier. The gunslinger from the dirty south is a grown man at QB. He is 6’2″ 230lbs. Last year he accumulated for over 4200 yards of total offense and 49 TDs.

The 2023 QB out of Gautier is arguably one of the best in the state. He puts you in the mind of Steve McNair or Donovan McNabb. He is a big guy that can get it done with his arm. He doesn’t take off a lot. If the pocket does collapse he keeps his eyes down field hoping that one of his receivers get open. Kaden is a very accurate QB. The way he puts the ball on the money is what receivers want from their QB. He does a very good job of getting the ball out on time allowing his receivers to catch it and pick up yards after the catch.

Kaden is a true pocket passer. He is a guy that can sit behind an All American offensive line and make you pay with his big arm. He has a great IQ of the game. This kid can read a defense and pick out who needs the ball. Irving is not a guy that you have to tell who to throw it to. This kid is very polished and knows how to go through his reads. Kaden isn’t just a game manager. He is a guy that can change the course of a game. You want a guy like Kaden leading your offense.

“I think Kaden is very underrated,” said Wyatt Davis. “He can throw the ball very well and is a good pocket passer who can get it done with his feet.”

Wyatt Davis has been training with Kaden and has been getting his mechanics on point. The arm strength and accuracy that Irving possesses is next level. This kid also has great leadership skills to go along with the natural ability he has. He isn’t a guy who likes to lost. Kaden isn’t satisfied with just being on a team that puts up big numbers and flashy plays. He is a born winner and wants to see his team make a run in the playoffs.

“I’ve been working on knowing the game better on a mental aspect of things,” said Irving. “For us to make a deep run in the playoffs we definitely need to finish drives when we get inside of the red zone instead of being known as a big play team!”