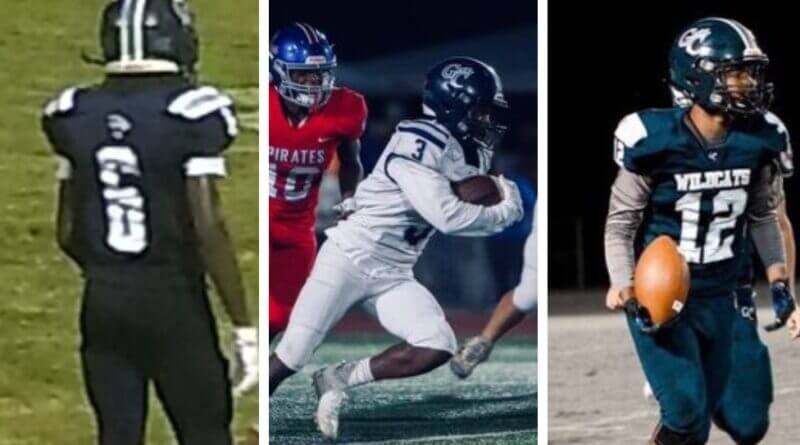 KJ Miller, BJ Johnson and Keenan Franks are a three headed monster for Greene Co. Look for these three to have a big season later this year.

On the next level he will make a nice slot receiver. All he need is some training on more releases and how to run routes and he will be a star coming off the line. He already has the experience of how to run the ball so when he catches it he will be something to deal with.

Bryson Johnson aka BJ is the truth. He is 6′ 170lbs This kid is an athlete who needs to be be talked about. In 16 games he has 29 receptions, 394 yards and 5 TDs. On defense he has 8 career interceptions, 102 total tackles and 10 pass break ups. I really like this kid. On offense he is very mean after he catches the ball. On defense he closes to the ball very well and isn’t afraid to tackle. He also does well at corner covering receivers one on one. He knows when to press and he knows when to play off and rely on his instincts and feet. I love the way he disguises his coverages as well. This kid has a great football mind. He has superb ball skills so he doesn’t have a problem with catching interceptions like most young DBs. I think this is a guy who will start to get a lot of recognition the more he attends camps and more eyes gets on his film. He is a true baller. He has a chance to finish his career with at least 20 interceptions.

Keenan Franks is another guy who makes some great plays for Greene Co. He is 5’9″ 170 and has a lot of speed as well. He has the ability to produce a lot of yards after the catch as well. Franks is also very shifty. He comes out of cuts blazing fast and has great acceleration. Keenan plays with a chip on his shoulder and he keeps defenders missing him in open field. Keenan also has the ability to play multiple positions for Greene Co. He has nice vision and patience in the backfield as well. I think he will be a slot receiver at the next level, but right now he is an amazing RB.

These are three very good guys to check out. They have contributed early for Greene Co. KJ Miller is a senior, but BJ & Keenan have two more seasons to improve their numbers. I think all three of these guys are D1 caliber guys. I also think they all need to get in the weight room and to more camps to show off their skills. KJ and Keenan could use more footwork and I think BJ needs more individual DB training. I can see him playing corner or safety at the next level. Overall these are amazing players and have so much potential. Keenan is a bull when he carries the ball. It’s like he is running with a vengeance.

“KJ is the true competitor that he shows. He doesn’t even want to lose even if we’re playing checkers or something. He competes in every single drill of practice and that goes for both sports as well. Just an absolute competitor. BJ has a cool head in every situation. He has great composure. Nothing can rattle the kid, and that’s even with him playing both ways. He remains calm, cool and always ready to make a play. Keenan is his determination and will and want to be as great as he can for his team. He’s worked so hard this off-season and really improved in every area of his game. He works his butt off and also is a great leader for the young ones under him. For example, we worked out Saturday morning. Him, our QB and an 8th grader. All on Keenan. He set everything up and led the workout. Just pure determination and I think it shows when he runs the ball as well,” said Coach Moore.