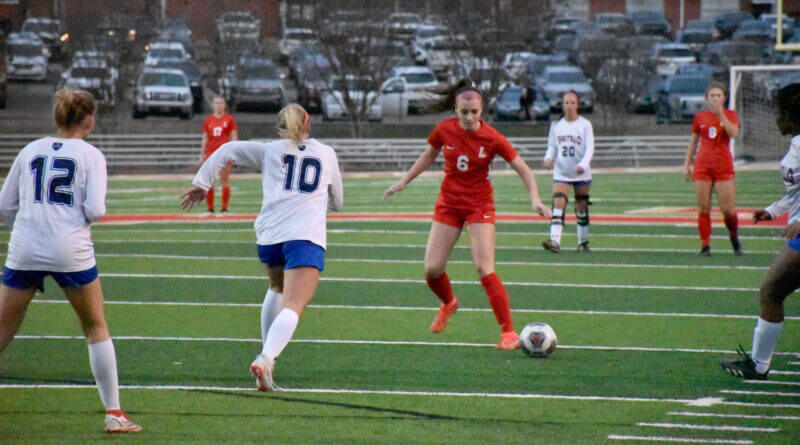 *Lafayette’s Hudson Lindsay receives a pass from a teammate attempting to move down field. Photo courtesy of Jared Redding.*

OXFORD — For the first time in two weeks, Lafayette’s girls soccer team was tested on the pitch.

Like most meetings with Saltillo, it was another tough battle, but the Lady Commodores came out on top once again in Tuesday’s MHSAA Class 5A North Half Championship game in order to play for their fourth consecutive 5A state championship this Saturday.

“It’s always a battle against Saltillo,” LHS head coach Melinda Scruggs said. “(Saltillo) always come out and play hard. It’s the same on both sides. It was physical on both sides, but it was one of those things where you have to keep pressing and do the things we’ve been working on. It worked, so that was good.”

Caroline Perkins scored Lafayette’s only two goals of the night. The first one came within 20 minutes from the start of the game while the second and go-ahead goal came in the 67th minute. The second one came mere minutes of a Saltilo’s game-tying goal. Julia Perkins drove the ball downfield, lost it briefly, then her sister Caroline game in and put it on the back of the net.

“It’s collective,” Scruggs said. “That to me was team effort. Julia sacrificed herself and Caroline finished it. Ultimately, there’s certain girls that score goals. I always want to say it’s the entire team that gives the effort to make it happen. Across the board, really proud of these girls.”

The Lady Tigers kept Lafayette on their heels most of the night, forcing their defense to make some key saves, particularly to start the game and set the tone. That all carried over into the second half despite a late Saltillo goal by Riley Dickens to make things interesting late.

“They really did. We had a session yesterday about not stepping as much. That frustrated them because they want to step. But I do think keeping the ball in front of us the whole time was really hard for them to get behind us,” Scruggs said.

The Lady ‘Dores will face either George County or Florence for the MHSAA Class 5A State Championship game on the campus of Brandon High School.

“Our slogan is ‘to the top.’ We talk about all the mountains we have to climb. It’s really hard to stay on top of that mountain. I’m proud that we’re going to get another opportunity and hopefully show out on Saturday,” Scruggs said.