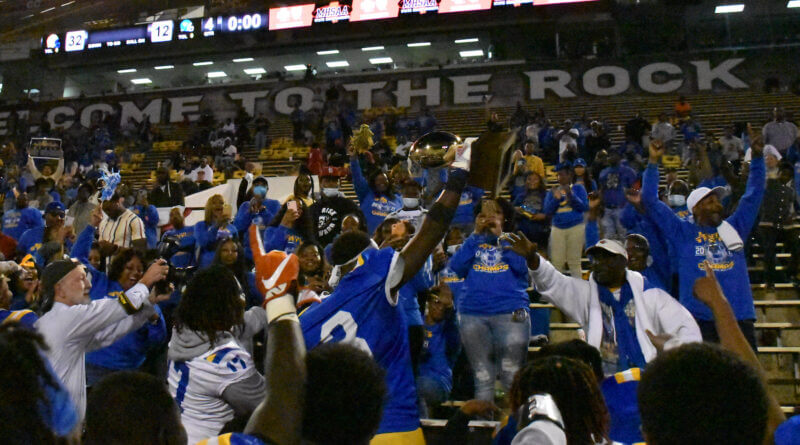 HATTIESBURG — In 2012, Bay Springs head football coach Dan Brady won a state championship as an assistant at Stringer. Inside his championship ring is a quote that says “Do what we do.” That’s just what his Bulldog team did nine years later, knocking off previously unbeaten Simmons 32-12 in the MHSAA Class 3A State Championship. The win is the school’s first state title in program history after three failed attempts.

“Feels great. We’ve been close several times,” Brady said. “I knew we had a good opportunity. Everyone talks about how good Simmons is, they’re a good team, but we’ve been in some close games and dog fights and found a way to win. That was a big difference. Our kids stuck to the game plan, our kids never wavered.”

After a relatively quiet first half, eventual championship game MVP Anthony Ross exploded in the second half, finishing with 219 yards on the ground while averaging almost 11 yards a carry.

““We found some stuff at halftime, everyone we play will stack up to stop Ty Jones and that helps kids like Anthony. The good news is that they’ll be wearing Bay Springs jerseys next year,” Brady said.

Both teams opened the game with punts, but Simmons found a way to score first. Vontrez Rush returned Bay Springs’ first punt and weaved through defenders en route to a 63-yard return to the end zone for the game’s first touchdown. The Blue Devils held a 6-0 lead with 7:13 left in the opening quarter. Anthony Newell proceeded to use a big pass play to score one of his own. The Bulldogs put in a two-point conversion to take their first lead of the game just over three minutes later.

Bay Springs almost immediately trailed again. Blue Devil QB Devontae Rush called his own number, found an opening and hit it for a 70-yard touchdown run. Another failed two-point conversion made it a 12-8 Simmons lead, which stayed going into the locker room.

“I told them to calm down, stick to the game plan and do what we do. We’re not going to change what we do until someone stops it,” Brady said.

For the first nine and a half minutes of the second half, both teams kept the other out of the end zone until it took one big run from Ross turned the game on it’s axis. Ross later scored on the goal line to allow Bay Springs to retake the lead, 16-12 with 2:31 left in the third quarter.

The Blue Devils proceeded engineer a promising drive of their own. After converting a 4th-and-5 in Bulldog territory, penalties and a bad snap put Simmons well outside the red zone. In desparation, Devontae Rush threw an interception to Jamare Holiday. Ross capitalized with another score to make it a two-possession, 24-12 game midway through the fourth. Tyrick Jones later put in the final dagger, scoring from 30 yards out and starting the Bay Springs celebration prematurely, ultimately leading to them lifting the school’s first gold ball. The Bulldogs finish the 2021 season 12-3.

“Those are the kids we coach: tough, gritty kids. It’s about these guys on this team,” Brady said.