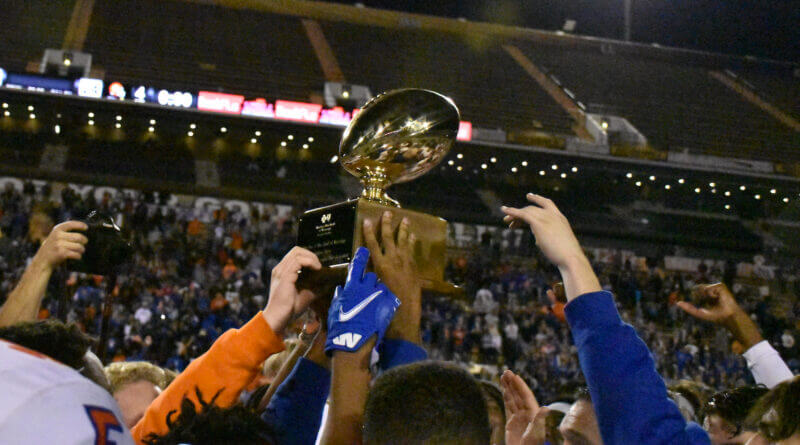 HATTIESBURG — Two weeks ago, Jake Norris was a backup quarterback, leading rusher Robert Dumas Jr. was out with injury and the Madison Central Jaguars were given all they can handle in their second round playoff matchup. On Friday night, Norris and Deandre Pullen led the way offensively, the defense made timely turnovers and stops and the Jaguars shed two decades worth of demons.

In what turned out to be a classic Jackson-Metro area showdown, Madison Central took advantage of Brandon’s mistakes and held on for a 24-17 win in the MHSAA Class 6A State Championship game at M.M. Roberts Stadium. The Jaguars win their second state title in the school’s 30-year history and after several painful semifinal losses over the last two decades.

“It feels wonderful,” Madison Central head coach Toby Collums said. “I’m super happy for this community. It’s been a long time coming. I’m so proud of these kids for finding a way to win a state championship, especially against a group as good as Brandon. That’s what it was all about tonight, finding a way to win.”

Norris went 5-for-9 and 124 yards through the air and rushed for 55 yards while accounting for two scores. Isaiah Spencer finished with a rushing and receiving touchdown while Pullen rushed for 132 yards of 25 carries. At the end of the night, Norris garnered MVP honors.

“Jake is just a dude. He’s a jack-of-all-trades. He plays quarterback, plays tight end and became a great running back late,” Collums said.

Collums won a state title 28 years ago to Friday’s game as a player at Smithville and now has a gold ball in just his first year as Madison Central head coach.

“It’s tough anywhere, in your first year or 27th year, it doesn’t matter. You have to have breaks and have a group of kids like these that are resilient and be willing to do whatever it takes to win a ball game,” Collums said.

The Bulldogs started things off on offense and immediately took to the air in order to get deep into Madison Central territory. A few shaky plays gave Brandon 3rd-and-goal from the 23-yard line, but Landon Varnes found Lester Miller deep in one-on-one and the two connected for the first score of the game. That gave Brandon a 7-0 lead just over three minutes into the game. The Jaguars looked to return the favor after knocking on the door shortly after. Deandre Pullen took a handoff over the top, but lost the football in the process. Brandon recovered in the end zone for a touchback. However, the Bulldogs failed to capitalize.

Madison Central’s ground game gave them another chance early in the second quarter, but had to settle for a 34-yard goal by Max Zuluaga, making it a 7-3 ball game. The Jaguars continued to settle in defensively and got the ball back soon after. Norris used a few physical runs to lead the Jags down near the goal line. This time, they broke through. Isaiah Spencer lined up behind center, raced to the corner and found the end zone. With 5:48 left in the half, Madison Central had a 10-7 lead, their first of the game. The Jags threatened again right before the half, however, a 4th down gamble near Brandon’s red zone backfired and kept the score the game going into the locker room.

Brandon received the second half kickoff and started the half off similar to the opening drive, with Varnes connecting with his receivers before reaching the red zone. Madison Central held, but a 32-yard field goal by Jalen Ballard tied the game up at 10 with 7:03 left in the third quarter. Almost immediately, Madison Central found itself back on top. With play-action on 3rd-and-long, Norris threw a deep ball dime to Spencer, who raced to the end zone for a 79-yard scoring strike. Just like that, the Jaguars led again, 17-10. Madison Central had a golden opportunity to blow the game open after forcing a turnover on downs, but failed before going into the final quarter of play.

Jarvis Durr carried the Bulldogs on his back, highlighting an impressive drive and capping it off with a goal line score that tiled the game at 17 apiece a few plays into the fourth. After forcing a punt defensively, the Bulldogs had a chance to take their first lead of the half, but a Durr fumble near midfield would later prove costly. Norris and Pullen led yet another physical drive that ended with the go-ahead score. An third down offsides penalty inside the 10-yard line gave Madison Central a fresh set of downs and Norris made them pay with a two-yard touchdown run. The Jaguars had a touchdown lead with 3:41 left to play.

The Jaguars ramped up the pressure up front to force Brandon with a 4th-and-long situation and it worked one more time to force a turnover on downs. In attempt to milk the clock and burn Brandon’s timeouts, Spencer picked up the final first down to ice the game. A gatorade bath for Collums soon followed.

“It felt good. It means we did something good,” Collums said. “I’ve been waiting a long time. Many times we’ve been in North Half or whatever. We finally got over that hump.”