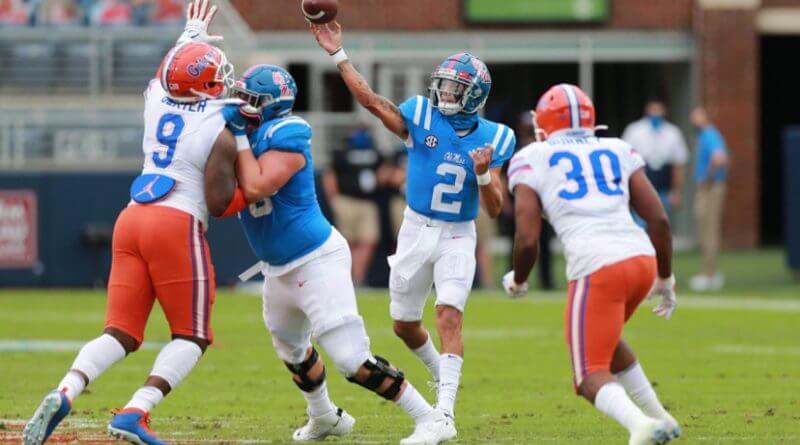 The Rebels were hoping that Saturday would be a joyous day. A coming-out party for the reemergence of success for Ole Miss football under new head coach Lane Kiffin.

Quarterback Kyle Trask and head coach Dan Mullen made sure this did not occur on their account.

Behind one of the most prolific offensive performances in recent Florida history, the #5 Gators started off their 2020 season with a 51-35 road victory over the Rebels.

The Rebel offense responded quickly with a seven-play drive that ended with a Matt Corral strike to Dontario Drummond from 46 yards out to tie the game at 7-7.

After trading interceptions, both offenses fired back with touchdown passes to equal it back up at 14-all.

However, Florida captured the momentum from there and never let off the gas.

Trask would pass for two additional touchdowns in the second quarter to Kadarious Toney and Pitts, respectively. This allowed the Gators to take a 28-14 lead into halftime.

In the second half, nothing changed for Florida. The Gators scored on all five second-half drives, including three field goals and two more Trask passing touchdowns.

The Rebels opened up their second-half with a touchdown. However, it would be a missed field goal and an inability to get off the field on third down that doomed Kiffin’s squad in his debut.

The Rebels weren’t too far behind on offense with 613 total yards. Corral finished 22-31 with 395 yards with three touchdowns and an interception. Elijah Moore finished with 10 receptions for 227 yards, seven yards away from the all-time single game record for receiving yards at Ole Miss.

Ole Miss will travel next Saturday to face Kentucky, who dropped their opener 29-13 to Auburn.