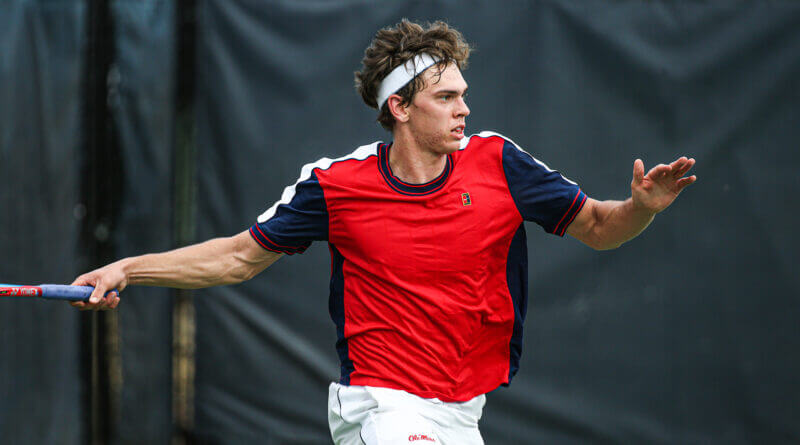 Ole Miss men’s tennis wrapped up qualifying play at the 2022 ITA All-American Championships on Tuesday, with senior Nikola Slavic continuing on to represent the Rebels in the main draw of singles play.

A total of three Rebels battled it out in pre-qualifying and qualifying rounds of singles and doubles, fighting to earn places in the main field of competition in Tulsa. The Rebels finished qualifying with an overall record of 3-2 in singles and 2-1 in doubles play.

Nikola Slavic, who reached the Round of 32 in singles play at the 2021 ITA All-American Championships just a year ago, sits as the lone Rebel to make the main draw of play beginning on Wednesday. Slavic will compete as the No. 5 overall seed in men’s singles after earning automatic qualification to the tournament’s main draw.

Slavic teamed up with fellow Rebel Lukas Engelhardt in qualifying doubles, trying to punch the duo’s ticket into the main doubles draw on Wednesday. The pair won in their first two matches on Monday, defeating Michigan State’s Baris/Lair (6-7(3), 6-4, 1-0(11)) and Michigan’s Bickersteth/Young (6-4, 6-4) to advance to Tuesday’s final round of qualifying.

Despite a hardfought contest going three sets against the duo of Nirundorn/Tokac of Florida, the Rebel doubles squad ultimately fell 1-6, 6-4, 1-0(1).

Junior John Hallquist Lithén also made a strong push for the Rebels playing in singles qualifying the past two days. Lithén started his week out with a victory on Monday over UC-Santa Barbara’s Phillip Jordan 6-3, 5-7, 7-6(6), carrying his main draw hopes alive into Tuesday.

Lithén opened the day on Tuesday with a strong 7-6(3), 6-2 win over Penn’s Harsh Parikh, putting him one win away from qualifying for the tournament’s main singles draw. However the Gothenburg, Sweden, native fell just short of cracking the field, dropping his Tuesday afternoon contest against Jonah Braswell of Florida 6-0, 6-3.

Senior Lukas Engelhardt also saw action for the Rebels in singles play, participating in the pre-qualifying singles draw on Saturday and Sunday. Engelhardt bounced back from a loss on Saturday by snagging a dominant 6-1, 6-2 win in the consolation bracket over Gustavo Pinho of Oral Roberts.