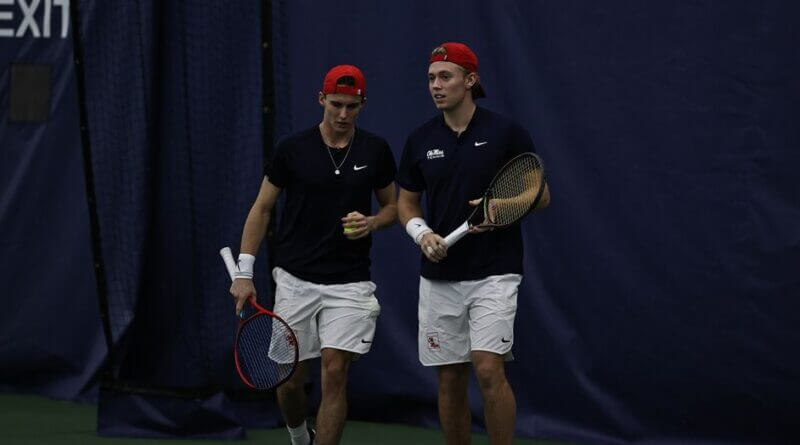 The Rebels were a force to be reckoned with, tallying wins in all six of the team’s doubles matches on the day as well as going a perfect 12-0 in singles play against the Tigers. The Rebels ultimately saw straight-set wins in 11 of those 12 singles wins.

The Rebels opened the first match of the day by coming out with a strong start in doubles action, sweeping through all three matches against the Tigers. Senior Rebel duo Nikola Slavic and Lukas Engelhardt would strike first in No. 1 doubles with a 6-2 victory, while the freshman duo of Isac Strömberg and Noah Schlagenhauf went on to secure the doubles point for the Rebels by the same scoreline in No. 3 doubles.

Simon Junk and John Hallquist Lithen rounded out doubles play for the Rebels with a 6-4 win on Court 2 for doubles action, giving all three Rebel pairings their first dual doubles victories of the season.

The Rebel dominance carried right into singles play for the Ole Miss side with all six matches ending with the Rebels capturing straight-set wins across the board. This helped the Rebels grab a match one victory by a score of 7-0.

Headlining the Rebel sweep were the first collegiate victories for two freshmen in the lineup, as both Schlagenhauf and Strömberg took home wins in the No. 5 and No. 6 positions, respectively. This marks the first time that two Rebel freshmen have earned singles wins in the same match since April 11, 2021, when John Hallquist Lithen and Jakob Cadonau both earned singles victories for the Rebels against Vanderbilt.

“The doubles with Isac was really nice just to start things off and to play in a real match finally,” Schlagenhauf said. “We had been getting better each practice and training session, but to finally be able to play in a real match is just such a nice feeling. As for singles, I honestly was pretty tired near the end of the first match but I still found a way to win, but then for the second match I just felt more loose and played much better.”

“It’s actually been a pretty tough week for me overall,” Strömberg said. “Before I arrived on campus I was actually sick for four weeks, and then I got here and there’s just been a lot of practices over this past week coming off of that. Thankfully I’m feeling better now and it’s fun to be able to play in some matches again. This was just really fun.”

Match two proved to be more of the same for the Rebels, as Ole Miss swept their way through the Tiger lineup to secure their second consecutive 7-0 victory over Tennessee State.

The freshman pairing of Strömberg and Schlagenhauf set the tone with a convincing 6-0 doubles victory, while the No. 1 doubles pairing of Slavic and Engelhardt earned their second 6-2 win of the day. Junk and Lithen would ultimately close out doubles for the Rebels on Court 2, fighting for their 7-6 (3) victory.

Moving to singles play, John Hallquist Lithen got to work straight away for the Rebels with a convincing 6-0, 6-0 sweep in No. 2 singles action. Lithen marked the first of five straight-set singles wins for the Rebels in match two, with Slavic, Junk, Schlagenhauf and Strömberg all following suit.

Senior Lukas Engelhardt marked the final match of the day for the Rebels, as the Augsburg, Germany, native lined up in the No. 4 singles position for Ole Miss. Engelhardt had a battle on his hands from the beginning, earning a tiebreak win in the first set before dropping the second set 4-6. Behind a strong showing in the third set super tiebreaker, Engelhardt closed out the team’s dominant performance with a 7-6(5), 4-6, 1-0(6) win.

With the team’s first pair of matches under their belt, the Rebels will now travel to Charlottesville, Virginia, for the annual ITA Kickoff Weekend as Ole Miss is scheduled for a pair of matches Jan. 28-29.

The Rebels will open their weekend with a Saturday clash against Princeton, where their result that day will decide whether they will meet No. 1 Virginia or Nevada on Sunday. Two wins for the squad on the weekend will guarantee their spot at the ITA National Indoor Championships, which are set to run Feb. 17-20 in Champagne, Illinois.