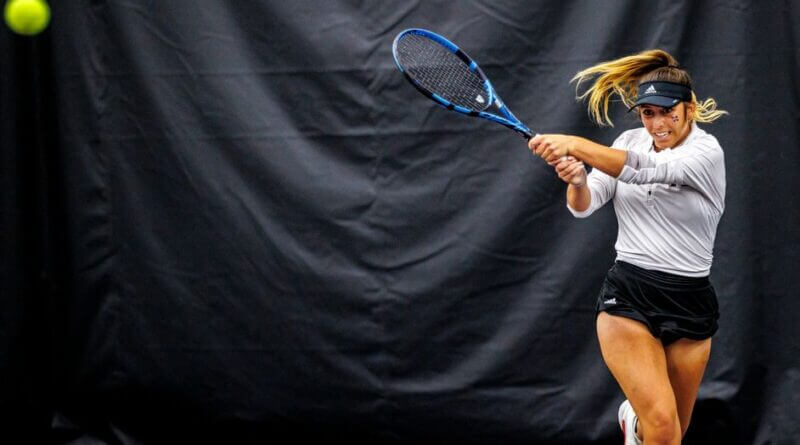 The early morning rain forced the Bulldogs to move inside the Rula Tennis Pavilion, where they posted a 7-4 overall record for the day.

MSU started out blazing hot on the singles side, winning five of the six first sets for the second day in a row. The Bulldogs went on to win five of their eight singles matches and are 10-4 in singles thus far in the tournament.

“My biggest take from this tournament is that it is very rare to find this many girls that care and fight hard,” said associate head coach Sachin Kirtane. “As long as their hearts are in it and they go out there and fight, more times than not you are going to be rewarded with success.”

Senior Alexandra Mikhailuk has had major success so far in the tournament, going a 4-1 by winning two singles matches and a pair of doubles victories.

“I’ve just been trying to trust my training this past semester because I have not had much tournament play prior to the fall season,” said Mikhailuk. “It also makes it a lot easier to stay engaged and stay focused when you have great teammates and great coaches supporting you.”

Mikhailuk, Gia Cohen and Maria Rizzolo all won handily against Louisiana Tech on Saturday, winning in straight sets and only giving up 10 games between the three of them.

Emily Surcey won a hard fought three-setter in her matchup with Valentina Vasquez. Surcey claimed the first set 6-4 but dropped the second 6-1. The sophomore transfer from Arkansas State bounced back in a big way in the third, shutting out Vasquez 6-0.

Sydney Hrehor split her first two sets with Memphis’ Miriam Grossman, forcing a super tiebreaker in the final set. Hrehor won the first set 6-4 before losing the second 6-3 and the super tiebreaker 10-5.

Antonaki and Cohen claimed the Bulldogs’ biggest win of the day in doubles as they defeated Memphis’ 55th-ranked team, Emily Meyer and Aran Teixido Garcia, 8-7(5). It marks back-to-back days that Antonaki and Cohen have won in a doubles tiebreaker.

Mikhailuk and Nirosham suffered the sole doubles loss for MSU, dropping an 8-3 decision at the hands of Camila Soares and Monique Woog of the Tigers.

The final day of the John Cade Invitational will be played on Sunday. The Bulldogs will close out the event by playing six singles matches against Memphis starting no earlier than 11 a.m.

Admission is free to all tennis matches.