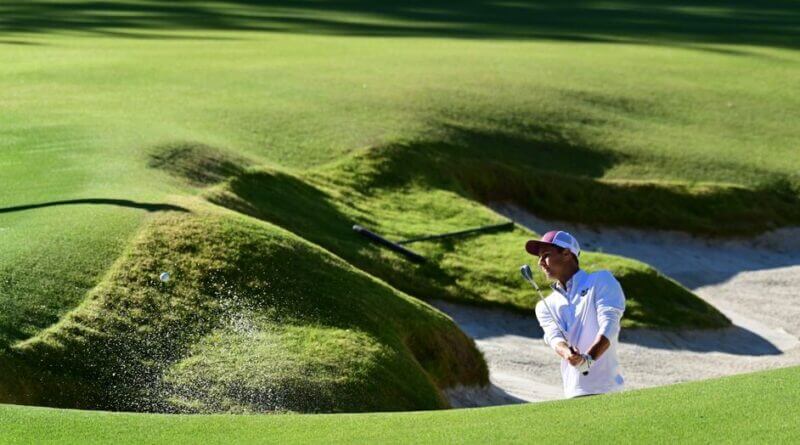 Mississippi State men’s golf finished day 2 of the Blessings Collegiate Invitational in third, a five-spot jump from the end of the first round. The Bulldogs shot 3-under for the day, combining for 20 birdies or better.

“We did a much better job doing the simple things well today,” head coach Dusty Smith said. “I thought the guys really responded in a positive way after yesterday’s round. These guys are made of the right character and handled the day like I thought they would. Today was a total team effort. We had five guys in the round all day and were able to feed off each other.”

Ruan Pretorius shot 1-under, making five birdies as well as an eagle on the No. 10 hole. He is currently tied for sixth. Ford Clegg shot the lowest for MSU for the day with 70, sinking five birdies and finishing in the top 20 through the first two rounds.

William Wann sits in a tie for 22nd with Texas A&M’s Jamie Montojo. He finished his round at a stroke under par, making three consecutive birdies on the No. 8-10 greens.

Garrett Endicott shot 76 for the day and sits in a three-way tie for 29th. Hunter Logan shot 1-over and is in a four-way tie for 34th.

Meanwhile, after a successful second round at the Blessings Collegiate Invitational, the Ole Miss men’s golf team heads to the clubhouse after rising three spots on the leaderboard. As a team, the Rebels shot a score of 297 (+3) during the second round of competition to head into the final round in 4th place.

As a team, Ole Miss made 18 birdies to secure the third-lowest round in the men’s field of competition. The Rebels are second in par-3 scoring (+2) among the field.

“Today was a step in the right direction for us,” said head coach Chris Malloy. “We played really well at times but did a great job of minimizing damage when we got out of position. That is key if you are going to navigate your way around this place. I look forward to watching these guys do more of the same tomorrow and continue to climb up the leaderboard.”

For the second day in a row, Sarut Vongchaisit led the Rebels in scoring. Vonchaisit started out the day on a high note with a birdie on Hole 2. Vonchaisit kept the ball rolling heading at the turn and secured a bogey-free back nine while making two additional birdies. The senior will head into the final round in 5th place at 2-under overall.

Hugo Townsend had a solid day with a 2-under performance, going bogey-free for his first eight holes while making three birdies along the way. At the turn, Townsend downed two back-to-back birdies on Holes 10 and 11 to launch him up the leaderboard. He sits tied for 14th at 2-over overall after 36 holes.

Cameron Tankersley began his second round at 4-over, but bounced back at the turn going bogey-free for his back nine holes. Tankersley tacked on three birdies on his scorecard to bring his round to 1-over for the day. Tankersley rose eight spots during day two and now is tied for 26th.

Jack Gnam and Tom Fischer round out scoring for the Rebels. Gnam put up a 5-over score for the day with Fischer right behind at 6-over. Gnam heads to the final round tied for 34th with not far behind at tied for 38th.