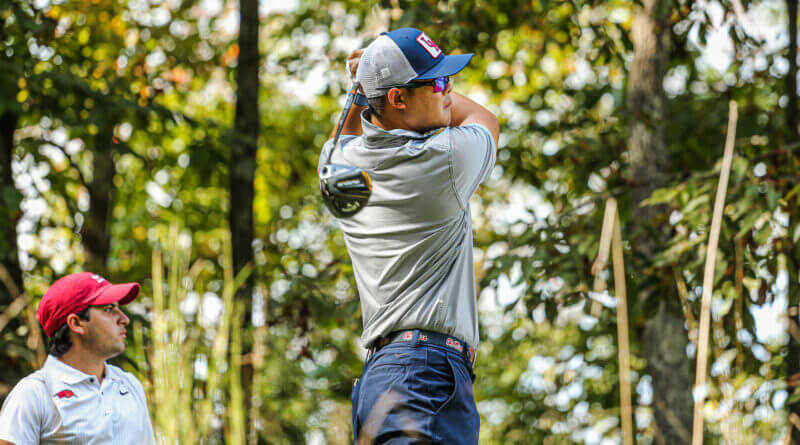 Sarut Vongchaisit shot a standout final round at the Blessings Collegiate Invitational for Ole Miss men’s golf to tie the tournament’s men’s single-round record of 65 (-7).

The senior’s third round performance brought him up three spots on the leaderboard where he finished in second place with a nine-under overall score of 207 (-9). This marks a new career-best finish for Vongchaisit. The 65 score matches the Bangkok, Thailand, native’s best 18-hole score, having logged a 65 at the 2019 Jerry Pate National Intercollegiate.

The Rebels shot their best 18 holes of the tournament on Wednesday putting up a 285 (-3) team score and the lowest score of the day. This allowed Ole Miss to rise two additional spots and finish second with an overall 873 (+9) score. Ole Miss led the field in par-5 (-19) scoring and were tied for first in eagles (4).

“This group of guys continues to impress me with their grit and determination when things aren’t going their way,” said head coach Chris Malloy. “To be the low round of the day in a field of this caliber and on a golf course this tough says a lot. Through the first three tournaments of the fall, we have had two to three true freshmen in our lineup and have been competitive each time out. I think that not only speaks volumes to the depth of our lineup but the future of our program.”

“Sarut played an incredible round of golf today. You don’t see very many rounds in the 60s let alone 65. I think that this is just the start of what will be a very successful year for him.”

Vongchaisit started out his round on a hot streak, making birdies on four out of his first five holes of the day. At the turn, Vongchaisit made an eagle on Hole 10 and followed with a birdie. On Hole 15, he made his second eagle of the day to cap off the day at seven-under.

Hugo Townsend secured a top-20 finish with his three-over scorecard of 219 on the week. In the final round, Townsend made three birdies and shot one-over to end his time at the Blessings tied for 13th. This is Townsend’s best finish since transferring to the Rebels.

Tom Fischer went even for the day after securing three birdies and an eagle in his final round. Fischer will head back from Fayetteville tied for 30th at nine-over overall.

Jack Gnam and Cameron Tankersley both ended tied for 33rd. Both Rebels made three birdies in the third round.

Pretorius tied for seventh at 1-under. He shot par or better in all three rounds, making at least four birdies each day.  Wann and Ford Clegg both tied for 25th with Arkansas’ Matthew Griggs.

Garrett Endicott, who was named SEC Freshman of the Week on Wednesday, finished his final round in a three-way tie for 30th. Hunter Logan tied for 49th, shooting 234 total for the event.