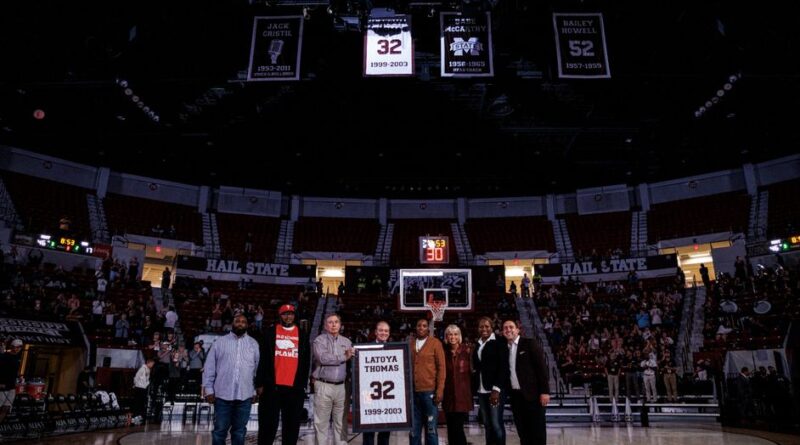 JerKaila Jordan was on fire for the Bulldogs leading the team with 12 points in the first half while also shooting 64.7% from the field. Denae Carter was strong on the defensive side with eight rebounds in the first half, with Debreasha Powe following closely behind with six. Anastasia Hayes led the Bulldogs in assists with five in the first half before ending with a game-high nine. This is the second-straight game that Hayes has tallied at least eight dimes.

Jessika Carter was the defensive star for the Bulldogs, recording the 20th double-double of her career with 15 points and 10 rebounds, second on the year. Powe recorded the first double-double of her Bulldog career with 11 points and 13 rebounds. Ahlana Smith didn’t go unnoticed with four rebounds, four assists, and five steals to help the Bulldogs get the 77-40 win over North Alabama.

The Bulldogs held the Lions scoreless for the game’s final four minutes. JerKaila Jordan was the driving force for State, leading the team with 17 points, six rebounds, and four steals. Denae Carter showed no fear continuing to play hard with 10 rebounds. Ramani Parker came in strong for the Bulldogs with 11 points with two key blocks to help give the Bulldogs back some momentum.

• MSU began the game on an 18-0 run before North Alabama made two free throws for their first points at the 3:48 mark in the first quarter, holding UNA scoreless for the first 6:12 of the game.

• State did not allow a made field goal until the 1:45 mark in the first quarter

• Second-straight game that Jordan led the team in scoring

• Smith led the Bulldogs in steals with five

• Held UNA scoreless for the final 4:11 of the game

“I’m excited, first and foremost, because that’s a quick turnaround. I want to give a lot of credit to North Alabama, their players, their coaching staff. I have a lot of respect for them. If you look at their season last year, they played Kentucky close, who won the SEC championship. They played Florida Gulf Coast really tough, who is a top 25 team. I’ve been in games like this with teams who are like that. Their coach has won 300 games, so I have a lot of respect for her and how she continued to fight. I was happy with that first quarter. It was a great way to jump out and make a statement. It allowed me to do some things that I don’t necessarily do, because we have a big game next week. As far as this game tonight, it was good. I saw a lot of great things. Film is going to be the best thing tomorrow. When shots don’t fall, we have to go and get it on the defensive end. In that second half, it was ‘we aren’t making shots’ instead of ‘we better get stops.’ I couldn’t be more proud of my team. I challenged them after that game Wednesday night. Thursday was a light walk through and Friday I told them that we have to bring it. I’m pumped to start out 2-0 and let’s see where we can go from here.”

On seeing LaToya’s number hanging in the rafters

“It solidifies a statement… when I talk to recruits on the phone they know the history here, they know the big games we played here, they know how special our fans are when they come and attend. But now I can tell a young lady when I go on a home visit, you know what if you put up a season like no other and have career like no other, your name and most importantly your number might be in the rafters one day, and that was a huge statement today.”

On what it meant to see her name in the rafters

“It means a lot. Especially where I’m from—Greenville, small town—never thought in a million years that it would be done. But I had so many people to help me throughout my journey; that’s why I say it’s been a long journey. I’m grateful and I’m blessed.”

“It means a lot now. At first, I was numb about it. Today I woke up with a lot of anxiety, a lot of nerves. So, it really feels good. I’m never the one to brag about what I do or what I accomplish; I always give the credit to my team, because without them I wouldn’t be here. It felt great to represent them, to represent this university and to represent my hometown of Greenville.”

On her message to younger players