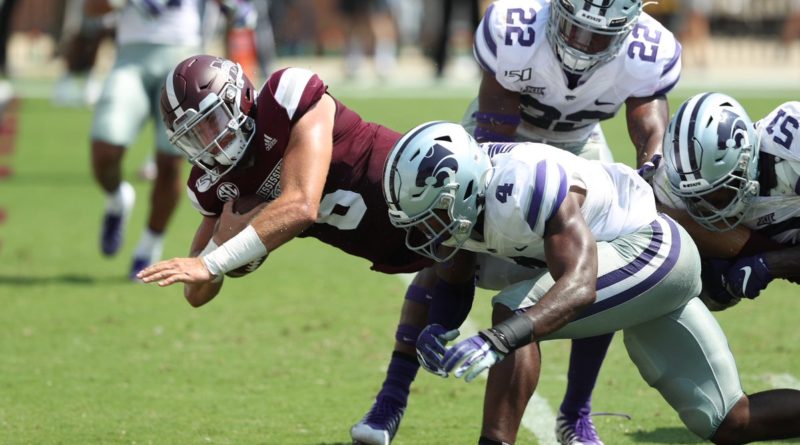 Heading into this game, it wasn’t known who the starter at QB would be for Mississippi State but it felt like a game Tommy Stevens wouldn’t miss after feeling better this week than he did a week ago. Instead, Coach Joe Moorhead handed the keys of the offense to freshman QB Garrett Shrader. State had turned to Shrader 2 weeks in a row, to come in a relieve an injured Tommy Stevens but this week they decided to start the freshman and have the grad transfer sit this one out.

The freshman accounted for 305 yards of total offense, 180 passing and 125 rushing, while completing 77% of his passes. While he did commit 2 turnovers, Bulldog fans had to enjoy what they were seeing from Shrader. It wasn’t just Shrader on offense, though. Arguably the best running back in the SEC, Kylin Hill, enjoyed 3 touchdowns while rushing for 120 yards on 26 carries.

The biggest play of the game, however, was made on the defensive side during Kentucky’s first possession of the game. Suspended for the first 3 games of the season due to violation of team rules, Willie Gay made his season debut and he made a statement immediately. Gay picked off Kentucky QB Sawyer Smith and took the interception back for a touchdown. It was nice having Willie Gay back on the field but they didn’t have him for long because Gay committed 2 unsportsmanlike conduct penalties and was ejected just before halftime.

The Bulldog defense had that “bend but don’t break” mentality, giving up 386 total yards. 232 of those were through the air, while 154 were on the ground. Allowing 5.5 yards per carry, it’s going to be a cause of concern when Mississippi State travels to Auburn next Saturday night to face Boobee Whitlow and the nasty Tigers’ offensive line. For now the Bulldogs will celebrate their first SEC win of the year, 28-13, over a gritty Kentucky squad that derailed their season a year ago.

Offense: Although Kylin Hill accounted for 3 TDs today, Garrett Shrader deserves and earned the helmet sticker this week. First collegiate start, against a SEC opponent, totaling 305 yards. The bearded freshman is going to be the face of Mississippi State for the next 3+ seasons.

Defense: Willie Gay Jr. Pick 6. All the energy this guy brings to the defense and the entire team, this was an easy choice. Playing in just one quarter and a half, Gay made his presence known early and provided enough energy to give the defense a boost for the entire game.

Special Teams: Tucker Day had another nice game for Mississippi State. While he didn’t get any of his 3 punts downed inside the 20, 2 of them very well could have been if not for mediocre coverage.

The Bulldogs travel to Auburn, for their first night game of the season. Auburn is coming off a big win at Texas A&M, but could the Tigers be looking ahead to a trip to Florida the following week? A tricky few weeks ahead for Gus Malzahn and his Tigers.